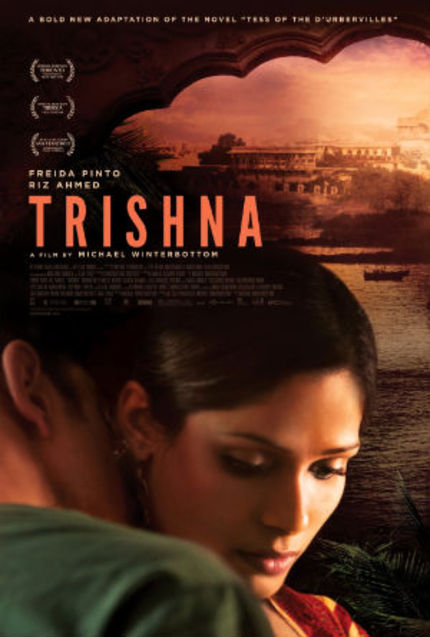 [In view of the film's limited theatrical release in the U.S. starting today, we revisit our review from the 2011 London International Film Festival.]

Even in Michael Winterbottom's prolific and varied film career, it is probably inevitable that he would again tackle an adaptation of a classic english novel, and (as is befitting his Britishness) make a film set in India.

His latest film is a modern retelling of Thomas Hardy's novel Tess of the D'Ubervilles. And while certain adjustments are made, the basic message of the novel remains the same in the film: men are untrustworthy, selfish jerks. The Indian setting might seem at first to be a cultural judgement, but Trishna's story is one that most women could relate to in some way. Think of it as the anti-Slumdog Millionaire; the film takes a real yet harsh view not only of Indian gender relations, but the continued place of women, especially the poor, as second-class citizens. India here is both beauty and terrible, a place where the divide between rich and poor is incredibly pronounced, and the poor have little or no option but to follow the will of the rich, especially when the poor is a woman.

Jay is a half-english, half-Indian man from a wealthy family. When visiting a temple, he falls almost immediately in love with Trishna, a poor girl who works various jobs to keep her family from starvation. He offers her a job at his father's hotel. He courts and eventually seduces her. Humiliated and pregnant, Trishna returns home. Jay comes after her, seemingly wanting to make a life with her, but as time passes, Trishna slowly realizes that to Jay, she will always be little more than an ornament and a servant.

Much of the credit of the film's success goes to cinematographer Marcel Zyskind. He neither indulges in sweeping landscape shots, nor does he shy away from some romanticism. At times the film is very romantic, but to its characters, their country is just their country and the camera accepts the landscape as natural as oppose to exotic. This suits a Hardy adaptation, in is lacks of melodrama, though Hardy was perhaps a bit more harsh. Apparently some of the dialogue was improvised; the entire film has a documentary feel. This may come partly from knowing the book, but each scene brings something that feel inevitable and expected.

And this is perhaps where the film falters somewhat. Obviously, when condensing a film for the screen, some of the complexity is going to be lost. In some ways, this works: breaking the story down to its essentials allows for examination of essence, which comes through in the small moments. But some complexity is allowable, and none exists. The story seems to be told at its audience, rather than to its audience. 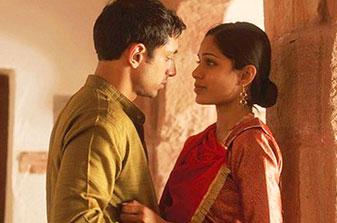 Riz Ahmed proves that his work in Four Lions was not a fluke. He plays Jay's slow descent from knight-in-shining-armour to snake-in-the-grass with note-perfect accuracy. But I continually wondered what kind of direction Winterbottom gave to Freida Pinto to play the title character. That she would be demure and shy is understandable; that she would come out of her shell when in Mumbai is believable, and perhaps, as a poor girl used to following the commands of men, she would then follow Jay back to the country even though it means a drop in status for her, is inevitable. But Pinto never quite pulls it off. The resignation to fate that one could accept in an 19th century girl is more more difficult to envision in a 21st century one, especially one who has lived in a major city and had freedom. Yes, through the film Trishna's personality becomes buried under the weight of tradition and obligation. But that burial should not extend to almost complete absence, so much so that Trishna's final, desparate act seems quite unbelievable.

One could argue more than a little sexism on Winterbottom's part; here is a film whose title refers to a woman, a woman is the main character, and yet she remains nearly entirely voiceless throughout. But perhaps that is the point; we might have come a long way, but we still have miles to go.

Of Winterbottom's three Hardy adaptations (the others being Jude and The Claim), this is definitely the weakest. But a weak Winterbottom film is still a good film, and worth seeing for its commentary on economic and sexual politics. It might be easy for us in the west, with greater access to resources, to avoid situations we find demeaning, such as accepting a job from a man you know has ulterior motives, or walking a dark road home because you have no access to transportation. As a woman living in poverty, Trishna has no such option. This is as much a film about the worldwide state of the vulnerable as it is an adaptation or a film about India.

Trishna opens in limited theatrical release today and will be available via various Video On Demand platforms as of Friday, July 20. Check the official site, linked below, for more information.