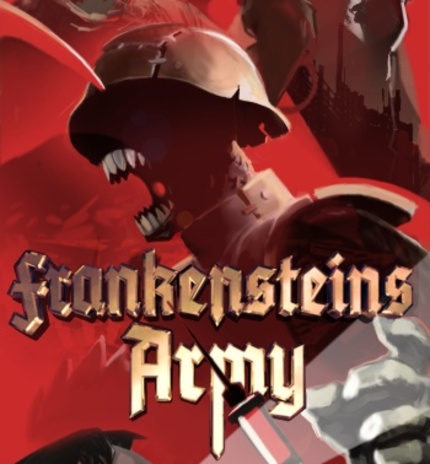 For those following Dutch director Richard Raaphorst's twitter account, these are exciting times as he is starting to drop nuggets of information and designs from his upcoming WWII-based horror film "Frankenstein's Army".

Back in March I visited the set and saw many a cool thing, most of which I wasn't allowed to share yet. But Richard's latest tweet shows a "propaganda" styled poster made for SDCC, and despite it being devoid of detail it shows several interesting things. Three creatures and Karel Roden as Victor Frankenstein himself are on it. The "zombots" are called Crypt Monster, Protobot and Mosquito Man.

Mosquito Man is the one on the top right, and although his overall design is still deliberately kept vague I'm happy his existence is confirmed by Richard because there are a couple of non-spoilery things I'd like to share with you all.

1: When I interviewed the cast I asked everyone for their favorite monster. The overall winner, easily, was Mosquito.

2: When Mosquito walked out of the creature effects shop for the first time, everyone on set (catering, carpenters, etcetera) stopped doing what they were doing and started to take pictures with their mobiles. Some even tried to sneak into the creature shop to check if there was more where THAT came from.

3: Mosquito is featured in some practical effects work that is absolutely astonishing. As in: "I cannot believe this was not cgi".

Anyway, here is the poster, and I am very curious what Richard will choose to reveal next!