COMPLIANCE Trailer Asks How Far Is Too Far? 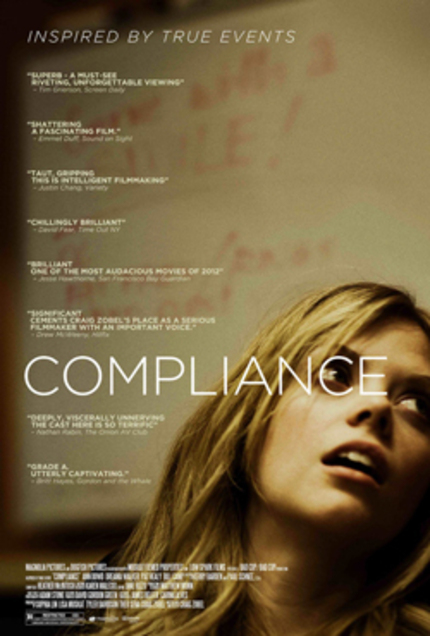 That is a long list of accolades and supportive quotes pulled from reviews of Craig Zobel's second feature Compliance. Do not be fooled however as Zobel's film proved to be one of the more divisive titles to emerge on the festival circuit this year.

At SXSW ScreenAnarchy guest writer John Jarzemsky was not as supportive and wrote in his review, "As is, Compliance is a collection of cheap thrills, stretched long past their breaking point and dressed up as thoughtful commentary in a fashion that is both dishonest and insulting." Ouch.

Inspired by a chilling true story, Compliance explores just how far one might go to obey a figure of authority. On a particularly busy day at the local ChickWich, the fast food joint's high-strung manager Sandra (Ann Dowd, Garden State) receives a phone call from a police officer saying her employee Becky (Dreama Walker, "Don't Trust the B____ in Apt. 23") has stolen money from a customer. Convinced she's only doing what's right, Sandra commences the investigation, following step-by-step instructions from the officer at the other end of the line, no matter how invasive they become.

In anticipation of its August 17th release you can now head on over to Apple's Trailer page for the film and watch the new trailer.
Tweet Post Submit

Do you feel this content is inappropriate or infringes upon your rights? Click here to report it, or see our DMCA policy.
Craig ZobelAnn DowdMatt ServittoDreama WalkerPat HealyBiographyCrimeDrama