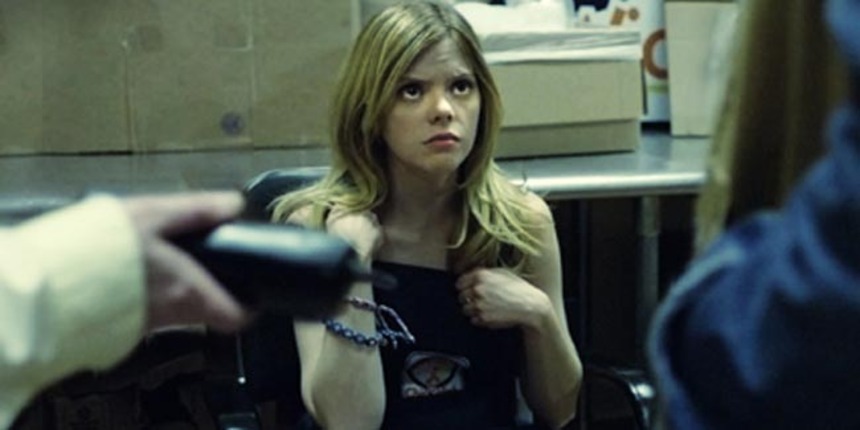 An interesting thing happened while I was viewing Compliance. It's something that might be unique to a festival viewing experience, but it nonetheless brings a few of the film's problems to the forefront. Let me explain: This feature from writer/director Craig Zobel is based on true events, and there is even an opening title card that announces it as such. However, due to lack of sleep and dehydration, I promptly forgot about this a little more than five minutes into the proceedings. As such, I spent most of the movie growing increasingly irritated that Zobel was expecting audiences to swallow the premise that so many people would behave in such a blindly idiotic fashion. Then, somewhere around the third act break, I remembered this story actually happened.

For the similarly forgetful, allow me to refresh your memory. Back in 2004, a man named David Stewart was arrested in Panama City, FL, in connection with a series of prank calls to fast food restaurants around the country, in which he had allegedly impersonated a police officer and convinced managers to detain and strip search female employees that he accused of theft. Compliance, which takes several creative liberties with its script, does not focus on the Stewart-inspired caller character (identified here as Officer Daniels and played with moderate success by Pat Healey), nor the victim of the interrogation (Dreama Walker), nor even Sandra, the daft manager who detained her (Ann Dowd). Instead, the story belongs to the abuse itself, and walks us, in excruciating near real-time, through the chain of events, growing more and more tedious and predictable with each passing minute. If the unbridled stupidity and gullibility of Americans is so interesting, it must be asked, why not just make a documentary?

The answer, of course, is that documentaries typically don't allow for much in the way of titillating, exploitative footage. In lieu of any kind of real character development, Zobel instead treats the audience to a dizzying array of voyeuristic and tasteless shots of Ms. Walker in various states of undress and simulated sexual acts. Yes, it can be argued that the audience is meant to be made uncomfortable in order to properly recreate the shame and horror that the victims of these crimes must have felt, but absent any insight as to who Becky is, the fetishizing of her pain and trauma is cheap, hollow, and boring. The film is presumably aiming to shock and get under the skin, but it really only irritates, prompting much eye-rolling and finger-tapping as it continues to brazenly insist that it has something to say.

Of course, the audience is kept abreast of just how shocked and dutifully horrified they should feel by an overwrought score that often lays over static images of the squalid restaurant, meant, perhaps to evoke a sense of empathy with the conditions of blue-collar America. Again, this conceit might have worked if we were given any reason to care about any of the parties involved, but instead it only serves as an obvious smokescreen, designed to convince us that we're watching something less insipid than third-rate pornography. It's assumed that the film is meant to get under the skin and shock, but in reality, it does little more than irritate due to its brazen insistence that it has something to say.

At the end of the day, Compliance amounts to little more than an artfully shot, competently acted re-telling of old headlines. It's a shame, because there's a lot to pull from here. More concern with Sandra might have yielded a fascinating look at the nature of authority, and how it affects the disenfranchised. As is, Compliance is a collection of cheap thrills, stretched long past their breaking point and dressed up as thoughtful commentary in a fashion that is both dishonest and insulting.

Compliance had its local premiere at SXSW on Monday. It screens again tomorrow and on Saturday.

Do you feel this content is inappropriate or infringes upon your rights? Click here to report it, or see our DMCA policy.
Craig ZobelAnn DowdMatt ServittoDreama WalkerPat HealyBiographyCrimeDrama