Jim Tudor
Featured Critic; St. Louis, MO
Tweet Post Submit
Welcome to ScreenAnarchy, or as it's now known, Prometheusville. Yes, here at everyone's favorite home for news and reviews of strange films from around the globe, we've all gone positively Giger gaga, chestbursting with excitement to commemorate the release of Ridley Scott's disappointing prequel! We've got more ALIEN than you can shake a facehugger at! Maybe you've been soaking it up: "Ten Reasons Why AVP: REQUIEM is Better Than AVP", "The Alien Head in PREDATOR 2: A 3000 Word Consideration", and "How To Steal Fire From THE AVENGERS" are just a few of my favorites that have popped up in the last week. Somewhere in the fray, you might even find my own review of PROMETHEUS. But if it's getting just a bit too icky and gooey for you, I've got the perfect remedy: More ScreenAnarchy writing about other movies! Base, squeamish male reproductive horror is all well and good, but let's put that aside for just a minute - It's capsule review time!!!

(Delaying the launch for just a second - let me state in all seriousness that the collective efforts of Peter Martin and the fleet of contributing writers for ScreenAnarchy's "ALIEN Week" has been nothing short of impressive. My bulbous glass space helmet is off to you, fellas.)
SNOW WHITE AND THE HUNTSMAN 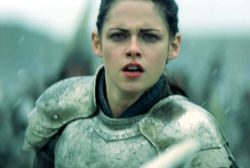 In the world of SNOW WHITE AND THE HUNTSMAN, the perpetually snarling damaged goods Kirsten Stewart is considered to be "the fairest in the land". That is, at least, according to evil Queen Ravenna's magic mirror. But, perhaps the fact that she doesn't realize her "mirror" is actually a gong has something to do with this mix-up. Then again, the film offers reason to believe that Ravenna's mirror discussions are all in her head anyhow, so I suppose there's also that.

Anyhow, it's the first time since Tim Burton's ALICE IN WONDERLAND that a former Disney princess became flesh and blood, put on armor, grabbed a sword, and led the climax of the movie into fantasy-genre battle. But this time, the results are far less egregious. Everything is well shot, well accomplished, never flat-out boring, yadda yadda yadda. Everyone involved now has at least a very impressive few minutes of footage for the their professional reels. And that's about all it's ultimately good for. A large project that is curiously devoid of soul, this SNOW WHITE cannot veer out of our collective memory of Disney's SNOW WHITE AND THE SEVEN DWARVES (despite both of them originating from a much older tale). When the little protagonists show up in this film, there's recognition and a chuckle on behalf of the audience.

The flavor of the month actors do commendable jobs, transcending their image on the one sheet (which is, let's face it, the true reason they were hired). Chris Hemsworth (THE AVENGERS, THE CABIN IN THE WOODS), who stars in a new movie every month now, is decent in what two years ago would've been the Sam Worthington role. Stewart makes her character's transition from broken fairy tale princess to messianic warrior entirely plausible. And Charlize Theron - she's this film's scaled down version of casting Brando in SUPERMAN. She's great as Ravenna, wearing impossibly awesome Colleen Atwood gowns and hamming it up all the way. Thanks to the miracle of visual effects, we witness her face magically shift from YOUNG ADULT (2011) Theron to THE DEVIL'S ADVOCATE (1997) Theron. The film doesn't deserve any hate, but once the book closes on this Happily Ever After, let's hope it stays closed, and we can move on from child's stories starring adults to adult's stories starring children. Such as: 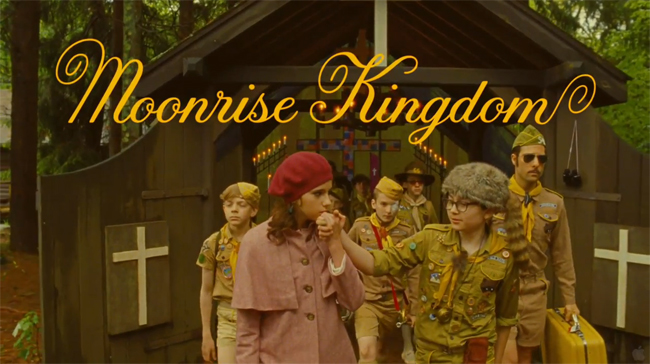 Anyone who doesn't crack open the plastic library book cover on Wes Anderson's latest work of odd cinematic prose is missing out not only on one of his absolute best films, but one of the best films of this year. In fact currently, it's THE best. Although peppered with a full supporting cast of both Anderson stock players (Bill Murray, Jason Schwartzman) and welcome new faces to his camp (Edward Norton, Bruce Willis), MOONRISE is all about a couple of crazy kids - fourteen year olds Sam (the orphaned, resourceful Khaki Scout reject) and Suzy (the smart girl in a pink mini-dress with the records, books, too much eye make-up), played by newcomers Jared Gilman and Kara Hayward. MOONRISE KINGDOM is a lovers-on-the-run movie, and they're the lovers. Moonrise Kingdom - a quiet beach area flanked by boulders and trees - is where they end up, for a time. While there, they bond like soul mates, mature beyond their years, although showing no evidence of BLUE LAGOON-style canoodling. Nevertheless, the downright intensity of their young love is something that would and probably should ordinarily freak out audiences, but in Wes Anderson's universe, where the adult world and the world of children so often blur mercilessly together, it makes perfect sense.

MOONRISE KINGDOM, set in 1965, has the distinction of being Anderson's first labeled period piece, although all of his films have a strangely retro feel. It's also the filmmaker's most salutary and cohesive utilization of his now-familiar tropes and themes, particularly the way beat-down, passionless and even depressed adults rigidly maintain control over the world of children, resulting in passionless youngsters, essentially born into bland routine and over-structure. And yet their youthful zeal cannot be fully suppressed, messily breaking out like toothpaste in a crinkle-cracked tube. The sheer weirdness of kids, particularly of little kids, always comes out in Anderson's films - and almost no one else's. It's only logical that these kids would grow up to become the disaffected authority figures and patriarchal blowhards we've seen before, from the BOTTLE ROCKET crew to the Tenenbaum family to Mr. Fox. MOONRISE KINGDOM delivers on the promise of all of what came before it, masterfully and hilariously. It is a lighter film than THE LIFE AQUATIC and THE DARJEELING LIMITED, but all the more poignant for it, with unexpected moments of exhilarating comedy fused with coming-of-age-too-soon melancholy. Anderson is in clearly intoxicated by his love of cinema here, paying small tributes to everything from Sergio Leone to Peckinpah to German Expressionism. But it's still Wes Anderson, better than ever, with his nose forever stick in a library book.