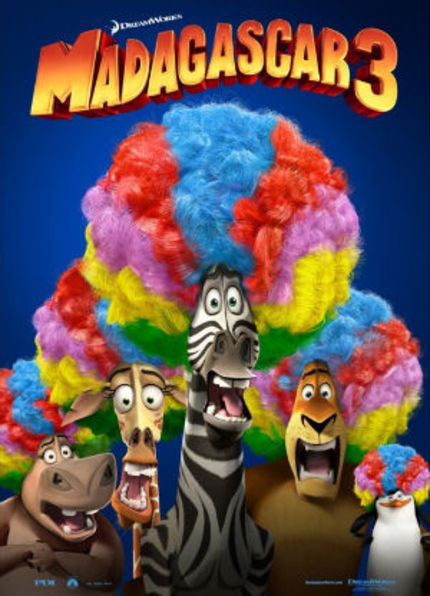 By stepping up its game, Madagascar 3: Europe's Most Wanted manages to be entirely compelling as a 3D spectacle, consistently filling the screen with a dazzling array of colors and forms and objects and animals, above all, animals who are under no obligation to obey the laws of gravity or the logic of common sense or buckle under the weight of expectations that's been laid upon other new franchise installments, such as this weekend's other major studio release, Prometheus.

Arriving in 2005, Madagascar was identifiably a product of the computer-generated side of DreamWorks Animation (established in 2000), following the pattern set by Shrek (2001), which was a huge financial success as well as the winner of an Academy Award for Best Animated Feature Film. Like that film (as well as 2004's Shrek 2 and Shark Tale), Madagascar featured a celebrity voice cast and well-known pop songs, but took it easy on the pop-culture parody. The animation looked terrific, but it was no other way memorable; I saw it during its theatrical release, but only have a vague recollection of its meager charms. I skipped Madagascar: Escape 2 Africa (2008), which again received mixed critical reaction while scoring big at the box office. Thus, my expectations were absolutely zero, and so it was a pleasant surprise to find the time passing quickly as the story unfolded.

At its narrative core, Madagascar 3 is routine: Alex the Lion (Ben Stiller), Marty the Zebra (Chris Rock), Melman the Giraffe (David Schwimmer), and Gloria the Hippopotamus (Jada Pinkett Smith) have been stranded in Africa for years, but yearn to return to their home at New York City's Central Park Zoo. Through a magical flying machine and the combined mechanical genius of chimpanzees and business savvy of penguins, the gang gets as far as Monte Carlo, where they incur the wrath of animal control Captain Chantel DuBois (Frances McDormand), who is determined to capture them for her personal collection. 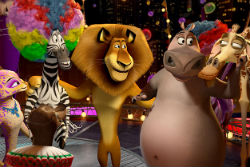 They meet up with a down-on-its-luck traveling circus, led by Vitaly the Siberian Tiger (Bryan Cranston), Gia the Jaguar (Jessica Chastain), and Stefano the Sea Lion (Martin Short), which they end up buying -- oh those smart penguins! -- and revitalizing, all in hopes of passing an audition in London that will return them to New York City.

Noah Baumbach (The Squid and the Whale, Greenberg) did a rewrite of the script by Eric Darnell -- both are credited -- but Baumbach's distinctive voice is missing; the lead animals may be neurotic New Yorkers, but they sound quite generic, even allowing for the confines of a family-friendly PG rating. Darnell has worked on all three of the Madagascar films as a writer and director, along with Tom McGrath. This time around, Conrad Vernon has been welcomed as a co-director; Vernon is well-versed in the DreamWorks house style, having shared as co-writing and co-directing credits on Shrek 2 and Monsters vs. Aliens.

So why does Madagascar 3 feel like a much more vibrant experience? For one thing, it seems that the filmmakers have learned to take full advantage of their playing field, so that the backdrops are almost always in motion, every minute of running time packed with layers of action. I'm not an advocate for 3D, simply because it's rarely been used with taste or discretion and seldom adds anything to the story.

Here, however, the playful environement is enhanced by the 3D textures in a seamless manner, serving as a substitute for what should normally be demanded of story and characters, in much the same way that horror pictures that follow a weary narrative path can be enlivened, and ocasionally salvaged entirely, by rabid humor or unexpected characters or exceptional practical effects work.

Allow me to cite one breathtaking sequence set in Monte Carlo, where the animals are attempting to avoid capture by Captain DuBois, a true cartoon character with generous proportions (an aged, short-haired and bespectacled Jessica Rabbit in front and back) and amazing flexibility.

Feeling like a classic car-racing video game, the animals flee through city streets, dodging traffic and pedestrians, with Captain DuBois in hot pursuit. The chase takes to the air, and then to rooftops, and then ever onward, the action occasionally slowed down to better appreciate the barest of inches that separate pursuer and quarry.

It's a chase sequence that would do Steven Spielberg proud, set amidst a magical unreal world that only faintly resembles the cities where the action is set. It's a fantasy, one that flies by quickly for adults and, one can hope, with great joy and sufficient humor for children.

Madagascar 3: Europe's Most Wanted opens on Friday, June 8 in the U.S. and Canada. Check local listings for theatres and showtimes.