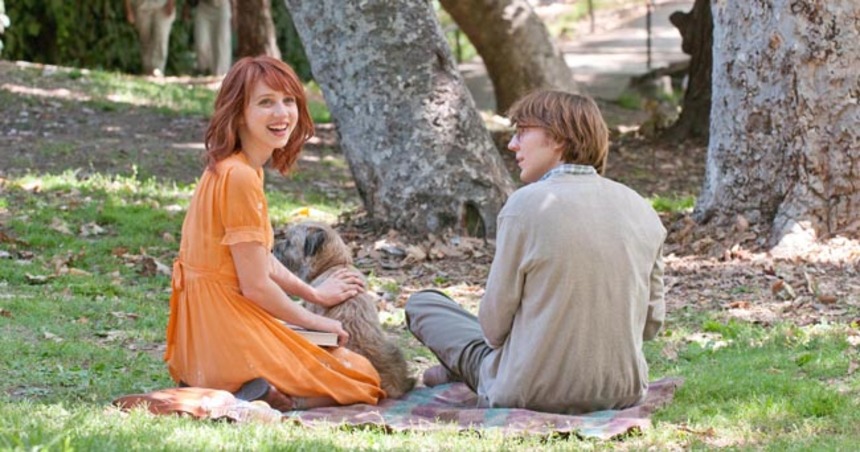 There's no shortage of movies exploring the minefields of love and relationships. With the abundance of schlocky Hollywood romances, the presence of honest connections on the big screen is too often undervalued. When a film is able to capture those connections and leave you feeling like you've learned something about yourself, then you know you have something special on your hands. This is every bit the case with RUBY SPARKS, the new collaboration from directors Jonathan Dayton and Valerie Faris, star Paul Dano, and writer/co-star Zoe Kazan.

Drawing from the myth of Pygmalion, RUBY SPARKS is the story of a successful but troubled writer Calvin (Dano), whose dream girl writing exercise inexplicably comes to life. Not much time is spent on the hows or whys of Calvin's sudden ability. There is no typewriter bought from a gypsy pawn shop plotline and little attention is paid to the hedonistic fantasies a young man might explore if he was suddenly gifted with such power of manifestation. This is simply an exploration of the relationship triumphs and troubles of Calvin and the woman he creates of his ideal.

The plotline that does develop surrounds Calvin's brother's (Chris Messina) suggestion that Calvin might have the perfect woman, not because he created her, but because he can so easily change her. At first, Calvin rejects this idea that Ruby be a work-in-progress. But when signs that the honeymoon might be nearing its end begin to appear, Calvin must confront the moral dilemma of using his power for the betterment of the relationship.

Kazan is sure to win heaps of praise for her first foray into screenwriting. This is a mature and wonderfully written film. But the collaboration factor is very much at work here, as well. Calvin is painfully neurotic but kept likable because of Dano's excellent portrayal. Dayton and Faris are best known for their multiple Oscar winning Little Miss Sunshine, but have come up against the Hollywood machine in their attempts to get a follow up film made before this. Here the husband and wife team bring a whimsical tone that works perfectly with Matthew Libatique's beautiful Los Angeles cinematography and Kazan's story.

But there is no argument to be had that the real reason this film succeeds is the incredible chemistry between Kazan and Dano. A real life couple of four years, the two developed the story as a project to star in together. Their interactions sing of an honest connection which makes the more serious places the story eventually visits all the more powerful.

It would be easy to dismiss the film before seeing it as a high concept romantic comedy. That is not at all the movie that these talented filmmakers have delivered. Instead we have the pleasure of a wonderfully honest and powerful exploration of love, created and brought to us through, and as an expression of that very love.

RUBY SPARKS premiered as the secret screening at the Los Angeles Film Festival. It opens in limited release from Fox Searchlight on July 25th.