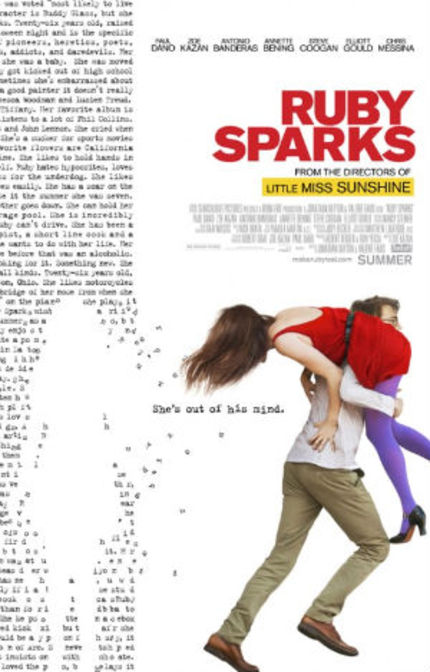 Opening in New York and Los Angeles today, Ruby Sparks is the long-awaited second feature film from directors Jonathan Dayton and Valerie Ferris. Paul Dano and Zoe Kazan star as a novelist and his muse, respectively; Kazan wrote the script.

Our own Ryland Aldrich saw the film at the Los Angeles Film Festival last month and praised it highly. In his words, here's the set-up:

Drawing from the myth of Pygmalion, Ruby Sparks is the story of a successful but troubled writer Calvin (Dano), whose dream girl writing exercise inexplicably comes to life. Not much time is spent on the hows or whys of Calvin's sudden ability. There is no typewriter bought from a gypsy pawn shop plotline and little attention is paid to the hedonistic fantasies a young man might explore if he was suddenly gifted with such power of manifestation. This is simply an exploration of the relationship triumphs and troubles of Calvin and the woman he creates of his ideal.

Ryland goes into further detail, without any true plot spoilers, and then concludes:

It would be easy to dismiss the film before seeing it as a high concept romantic comedy. That is not at all the movie that these talented filmmakers have delivered. Instead we have the pleasure of a wonderfully honest and powerful exploration of love, created and brought to us through, and as an expression of that very love.

Having seen the film, I am in completely agreement. Based on the chemistry of real-life partners both behind and in front of the camera, Ruby Sparks stands out in the summer of superheroes as an intimate story that never feels cramped by its own premise, filled with warmly-affecting surprises. The supporting cast includes Chris Messina, Antonio Banderas, Annette Bening, Steve Coogan, and Elliott Gould.

As noted above, Ruby Sparks opens today in New York and Los Angeles before rolling out across the U.S. in the coming weeks. It opens in Canada in limited release on August 3.