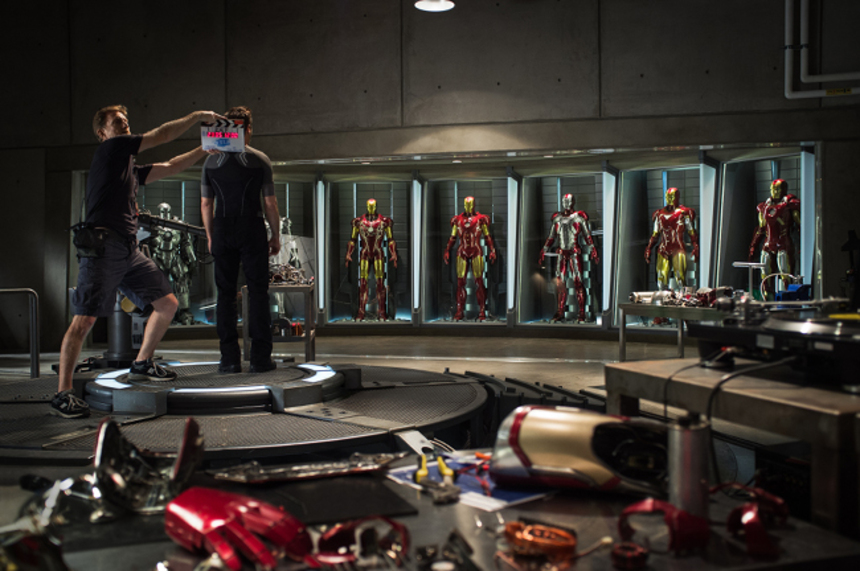 There's plenty of gear on display in the first official shot from the set of Iron Man 3, though not what many are taking to be the Iron Patriot suit that showed up in spy shots last week.

BURBANK, Calif. (June 4, 2012) - Following in the footsteps of the record-breaking Marvel Studios' release "Marvel's The Avengers," production on the highly anticipated film "Iron Man 3," directed by Shane Black, has commenced production in Wilmington, North Carolina. The production schedule will also include locations in Raleigh/Durham, North Carolina, Miami, Florida and China.

Marvel Studios most recently produced the critically acclaimed "Marvel's The Avengers," which set the all-time, domestic 3-day weekend box office record at $207.4 million. The film, which is currently in release, continues to shatter box office records and is The Walt Disney Studios' highest-grossing global and domestic release of all time and marks the studios' fifth film to gross more than $1 billion worldwide.

In the summer of 2008, Marvel produced the summer blockbuster movies "Iron Man" and "The Incredible Hulk."  "Iron Man," in which Robert Downey Jr. originally dons the Super Hero's powerful armor and stars alongside co-stars Terrence Howard, Jeff Bridges and Gwyneth Paltrow, was released May 2, 2008, and was an immediate box office success.  Garnering the number one position for two weeks in a row, the film brought in over $100 million in its opening weekend.  On June 13, 2008, Marvel released "The Incredible Hulk," marking its second number one opener of that summer.

Speculation continues to abound that Ben Kingsley is playing The Mandarin in this one, which would be an ... odd choice given that a major portion of the financing for the film is coming out China.
Tweet Post Submit