Jean Rollin On Blu-ray: THE RAPE OF THE VAMPIRE Review 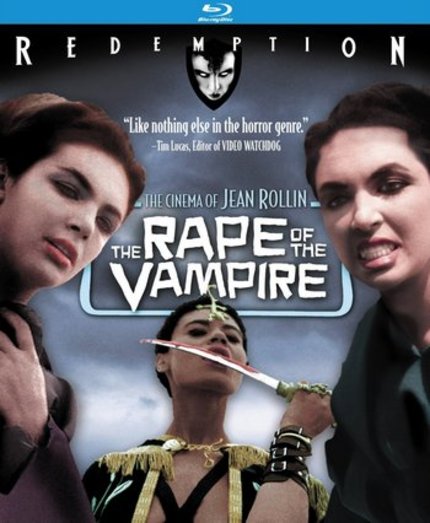 With the second wave of Jean Rollin Blu-ray releases from Redemption/Kino on May 29th, I get to resume this series, and that makes me smile. The first of the discs hitting store shelves next Tuesday is Rollin's debut feature, The Rape of the Vampire (Le viol du vampire). This is completely unlike anything else in his oeuvre, and yet representative of his obsessions all at the same time. The film is told in thematically interwoven short stories that, narratively, don't make a whole lot of sense. However, this film was mainly about Rollin getting his sea-legs, and it is apparent within a few minutes of the opening credits that the audience is in for something unique.

Attempting a plot synopsis for The Rape of the Vampire is a fool's errand. The film is not really about anything, it is a series of abstract images, vaguely strung together with vampiric imagery that isn't of the traditional stripe. This film is about atmosphere, more than perhaps any other film I've ever seen. It is incomparable in style and in substance, and yet feels quite at home in his filmography. The buds of Rollin's style can all be very clearly plucked from the images in The Rape of the Vampire, and they blossom into fruition in films like Lips of Blood, Fascination, and Les Demoniacs. Blood cults, vampire's revenge, and occult ceremony feature heavily in most of Rollin's most popular work, including his second feature, The Nude Vampire, which is probably the closest, tonally, to Rape, along with perhaps Lips of Blood.

As you can see from the web I've woven with the films in the above paragraph, it can be difficult to separate Rollin's films from one another at times. Jean Rollin was a filmmaker for whom his work became an extension of himself. His films are all somewhat similar because he shot what he knew and what he felt. The chaos of late '60s France made a huge impression on Rollin, and the abstract nature of The Rape of the Vampire reflects this chaos and puts it to the screen in a unique way that marries violence with eroticism in the very French tradition of the Grand Guignol.

Reviewing The Rape of the Vampire is nearly as difficult as describing it. Where does one begin? The film exists as a fragmentary dream, three short stories, none of which is fully satisfying, but nevertheless engaging. The film is evocative in it's simplicity, surely mostly due to the small budget, however, Rollin uses the sparseness of his resources to his advantage. The most memorable pieces of The Rape of the Vampire aren't its characters or its stories, but its images, many of which are unforgettable, like the vampire queen featured in the final segment and on the DVD cover, and the lonesome piers of the beach at Dieppe that haunted Rollin's waking dreams from his childhood make their first or many feature appearances in Rape.

Redemption/Kino's Blu-ray of The Rape of the Vampire might be their most overall successful disc yet. The image is not perfect, the print transferred is far from pristine, and there is quite a but of minor print damage, mostly in the form of white specks. However, the black and white imagery is quite solid aside from that, with impressive contrast and detail for a film nearing it's 45th year on this Earth. The French audio track is sufficient, though, again, not overly impressive. It supports the music and dialogue well, though, and that's what's important. Overall the A/V presentation is quite good for a film of this vintage and budget.

The reason this disc, overall, comes out on top when it comes to Rollin's Blu-rays is the extra features. In what is probably the most stacked disc yet we get a 16 page essay from Rollin expert Tim Lucas of Video Watchdog, a twenty-five minute making of featurette with interviews from many of the principals, two early short films that show Rollin's pecadillos from a young age, both a brief introduction from and a longer extended interview with Jean Rollin about the film, and a re-edit of a scene not shown in the film as screened. All of these features are fantastic, though I find myself partial to the making of, which talks a lot about the cultural atmosphere in which Rape was released, and the short films which illuminate some of Rollin's early influences.

The Rape of the Vampire on Blu-ray is a definite upgrade and an essential purchase for any fans of this unique filmmaker.
Sign-In to Vote
Tweet Post Submit

Order Rape of the Vampire on Blu-ray at Amazon