Blu-ray Review: WE NEED TO TALK ABOUT KEVIN 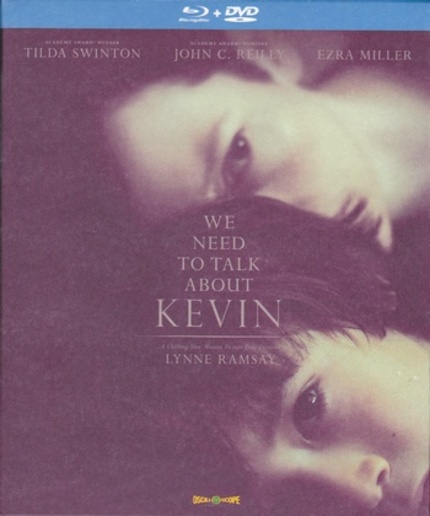 As the Blu-ray release for Lynne Ramsay's We Need to Talk About Kevin approaches, I thought I'd revisit my original review from Fantastic Fest last fall. The film made my Top Ten Feel Bad Films of 2011 list, and remains a powerful experience, even on repeated viewings. the review below ran during Fantastic Fest, but is now augmented with comments regarding the disc quality and features. Enjoy.

We Need to Talk About Kevin is a stunning piece of work and a tour de force for director Lynne Ramsay and Tilda Swinton. The film approaches a subject which is very hard to broach, and does it in a way that is confrontational, and does not give the viewer the answers it wants all the time.  Ramsay has created a film that is at once emotionally caustic and also inspires sympathy, but not in the way, or for whom, you'd imagine.

Eva (Tilda Swinton) and Frankin (John C. Reilly) are the parents of Kevin. Eva was a professional adventurer before motherhood came calling, uninvited. Eva does not take well to the idea of motherhood, she suffers from pre-partum depression and mourns the loss of her freedom openly. When Kevin is born, she cannot shake the feeling that this boy has built a cage around her from which she cannot escape. She is a mother now, and everything that she was before is gone, at least that's how she sees it. Franklin is much less conflicted, he loves his little boy, and devotes all of his energy to him. When Kevin shows signs of developmental delay, delayed speech and potty training for example, his parents attempt to help him however they can, but it soon becomes evident that there is something much deeper about Kevin that cannot be addressed, no matter how much love he gets. Eventually, Kevin perpetrates an act of mass violence at his school which reverberates far beyond the direct consequences that he and his victims suffer.

The storyline of We Need to Talk About Kevin is entirely non-linear.  The film plays like an extended flashback from Eva's point of view in which she pictures her relationship with Kevin and replays the numerous warning signs on which she tried to act, but couldn't. Where we see every waking thought from Eva, Kevin is a more enigmatic character.  He is the proverbial bad seed, his behavior is erratic from very early childhood, and his relationship with his mother in particular. Eva blames herself for everything, even when she's tried to mend fences, she fails miserably.  Each vignette becomes progressively more tragic, as Eva tries and fails to connect with Kevin, all the while watching her husband's relationship with the boy blossom. Kevin seems to revel in Eva's misery, and that is what makes this film different from Elephant, and Beautiful Boy.

Eva is reminded at every juncture in her life of what she is and what she has become.  There is the desire among some people to label the parents of children who commit heinous acts as failures, but We Need to Talk About Kevin takes the bold step of putting the shoe on the other foot. No one wants to blame a child for violence like this, but what if they are just wired wrong? Swinton's Eva takes a major beating in this film as she attempts to both connect emotionally her son and come to grips with the fact that no matter how she tries, she'll always be the mother of that boy. A boy who has seemingly dedicated his entire life to destroying her in the most heinous way possible. She is a broken woman, but she is one who chooses to keep on living. By the end of the film, I was wondering if she'd make the right choice.

Lynne Ramsay takes a touchy subject and makes it an emotionally jarring experience, but not in the way that you'd expect.  We Need to Talk About Kevin is deeply affecting and a sobering look at what happens when dysfunction runs rampant. Tilda Swinton's performance is absolutely harrowing, and her metamorphoses through the film from reluctant mother to desperate mother to the mother of that kid who killed people is devastating. With the entire weight of We Need to Talk About Kevin on her shoulders, Swinton hoists the film from a possibly melodramatic mire to a crushing discussion on the impact of nature vs. nurture. Ramsay and Swinton are an amazing team, and this film is definitely worth seeking out.

***
There ends my archival review of the film. In the time since then I've had time to reexamine the film and its devices and every time I think about it, the film gets richer. I recall many writers coming out of that screening and talking about the reliability of the narration and citing their questions as faults with the filmmaking. I heartily disagree with this notion, and this is one of the revelations I've had since that first viewing back in September.

We Need to Talk About Kevin is, at its heart, a horror film. You may call it a psychological thriller, a drama, or an artsy fartsy experiment with too much to say and too little focus, but the fact remains that many of the tropes, including the reliability of one's own memory, are pulled straight from the horror handbook. Who is narrating the story? Is it a present day Eva? The lack of voice over narration seems to confuse this theory, though it is certainly a viable one. The flashbacks in the film all seem to come from the memory of a tortured soul attempting to piece together the fragments of a life lived in vain.

Eva is a woman living the waking horror of every woman who either is a mother or intends to be one. She feels as though she has failed to make the most primal connection with her son. Even as he grew in the womb, she recalls no affection for that living being. Is this a valid recollection of her emotional state at the time? Has her psyche fractured to compensate for the heinous act committed by the fruit of her loins? Does she need to distance herself from this being in her own memory in order to cope with her own future? Lynne Ramsay doesn't give us easy answers, instead, she keeps us asking questions long after the lights come up, and that is one of many reasons that We Need to Talk About Kevin is such an enthralling film, because its effect outlives its duration.

Oscilloscope's Blu-ray presentation of We Need to Talk About Kevin is amazing. Lynne Ramsay is such a deliberate filmmaker that every detail is crucial to the whole. The grasp of mise en scene shown by Ramsay is impressive, and contributes to the atmosphere and impending feeling of dread every bit as much as the script and acting do. Oscilloscope have rendered Kevin in remarkable detail, and in such a way that all of those little touches that make the film unique are evident. The changes in color palette from one section to another are incredible, the sharpness and detail of the anamorphic ally shot scope cinematography are beautiful and accurate, and the contrast and brightness levels are impeccable. There is nothing to distract one from the experience at hand, and that is the greatest success that any home video product can achieve.

The audio in this film is every bit as crucial to the experience as the visual, and this Blu-ray has that facet of the presentation down pat. The DTS-HD MA surround track is quite impressive. While the sound isn't bombastic, it is crystal clear and each channel is easily discernible. Eva's mindset is easily gleaned from the audio track as random, and deliberate, sounds make their way through the sound field. An effective use of the surrounds and rears only strengthens the argument for Eva's confused mental state as noises interrupt her memories and distract her from her own past and present.

This Blu-ray disc manages to pack around an hour of quality bonus material into the proceedings as well, only sweetening the pot. While it may not sound like much, what there is truly helps one to understand all of the different aspects of the creation and production of the film. A 25 minute making of featurette gives us a feel for the origin of the story, as well as helping to understand some of the nuance that may be tough to pick up on a first viewing. Swinton, Ramsay, Reilly, and Miller each offer their own interpretations of the film and its messages, and like the viewers, their points of view all vary just the slightest bit. In some films this might create an unconquerable division, however, it helps Kevin to retain its mystery. The other fantastic extra is a 20 minute Q & A with Tilda Swinton in which she talks about her career beyond Kevin, and is a fascinating watch. She is remarkably erudite and shares openly her feelings about filmmaking in general and specifically about several projects, really great stuff. Finishing up the extras are a very brief red carpet interview with the author of the book, and several trailers for Oscilloscope films, including this one.

This remarkable all-region Blu-ray disc of We Need to Talk About Kevin is a must own item. If you've already seen the film you know why, but this is definitely one that rewards multiple viewings, so get on it! Highly recommended!

We Need to Talk About Kevin