Fantastic Fest 2011: WE NEED TO TALK ABOUT KEVIN Review 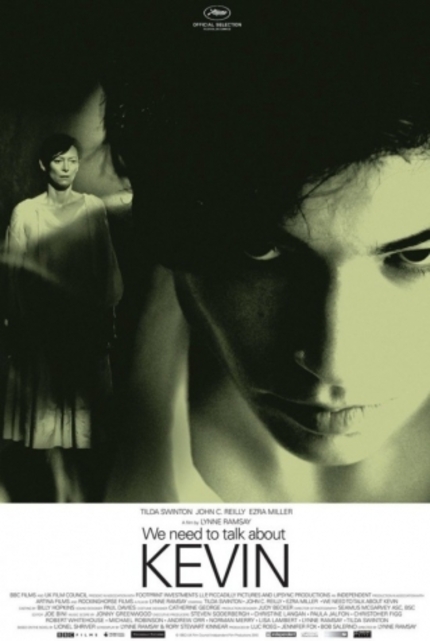 We Need to Talk About Kevin is a stunning piece of work and a tour de force for director Lynne Ramsay and Tilda Swinton. The film approaches a subject which is very hard to broach, and does it in a way that is confrontational, and does not give the viewer the answers it wants all the time.  Ramsay has created a film that is at once emotionally caustic and also inspires sympathy, but not in the way, or for whom, you'd imagine.

Eva (Tilda Swinton) and Frankin (John C. Reilly) are the parents of Kevin. Eva was a professional adventurer before motherhood came calling, uninvited. Eva does not take well to the idea of motherhood, she suffers from pre-partum depression and mourns the loss of her freedom openly. When Kevin is born, she cannot shake the feeling that this boy has built a cage around her from which she cannot escape. She is a mother now, and everything that she was before is gone, at least that's how she sees it. Franklin is much less conflicted, he loves his little boy, and devotes all of his energy to him. When Kevin shows signs of developmental delay, delayed speech and potty training for example, his parents attempt to help him however they can, but it soon becomes evident that there is something much deeper about Kevin that cannot be addressed, no matter how much love he gets. Eventually, Kevin perpetrates an act of mass violence at his school which reverberates far beyond the direct consequences that he and his victims suffer.

The storyline of We Need to Talk About Kevin is entirely non-linear.  The film plays like an extended flashback from Eva's point of view in which she pictures her relationship with Kevin and replays the numerous warning signs on which she tried to act, but couldn't. Where we see every waking thought from Eva, Kevin is a more enigmatic character.  He is the proverbial bad seed, his behavior is erratic from very early childhood, and his relationship with his mother in particular. Eva blames herself for everything, even when she's tried to mend fences, she fails miserably.  Each vignette becomes progressively more tragic, as Eva tries and fails to connect with Kevin, all the while watching her husband's relationship with the boy blossom. Kevin seems to revel in Eva's misery, and that is what makes this film different from Elephant, and Beautiful Boy.

Eva is reminded at every juncture in her life of what she is and what she has become.  There is the desire among some people to label the parents of children who commit heinous acts as failures, but We Need to Talk About Kevin takes the bold step of putting the shoe on the other foot. No one wants to blame a child for violence like this, but what if they are just wired wrong? Swinton's Eva takes a major beating in this film as she attempts to both connect emotionally her son and come to grips with the fact that no matter how she tries, she'll always be the mother of that boy. A boy who has seemingly dedicated his entire life to destroying her in the most heinous way possible. She is a broken woman, but she is one who chooses to keep on living. By the end of the film, I was wondering if she'd make the right choice.

Lynne Ramsay takes a touchy subject and makes it an emotionally jarring experience, but not in the way that you'd expect.  We Need to Talk About Kevin is deeply affecting and a sobering look at what happens when dysfunction runs rampant. Tilda Swinton's performance is absolutely harrowing, and her metamorphoses through the film from reluctant mother to desperate mother to the mother of that kid who killed people is devastating. With the entire weight of We Need to Talk About Kevin on her shoulders, Swinton hoists the film from a possibly melodramatic mire to a crushing discussion on the impact of nature vs. nurture. Ramsay and Swinton are an amazing team, and this film is definitely worth seeking out.

We Need to Talk About Kevin