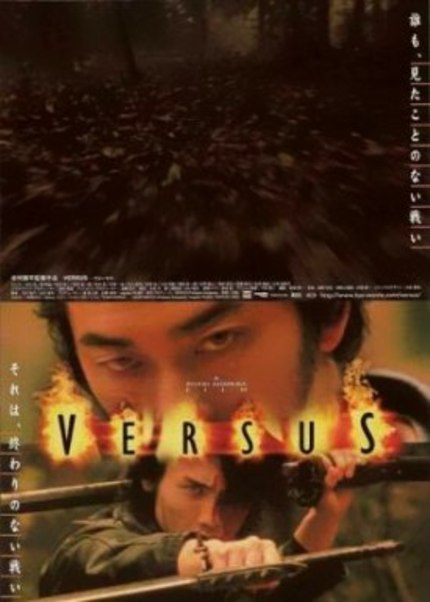 There is no doubt that Versus was Ryuhei Kitamura's (LoveDeath) break-through film. His two earlier efforts made little or no splash in the film world, but once Kitamura released Versus doors started to open. As often the case, Kitamura never managed to match the genius of his break-through film, then again it makes the original all the more special. Even though this low-budget vehicle is already more than 10 years old, there's still plenty of life left in it.

Trying to find the exact source of the current Japanese wave of splatter films is quite tricky (I would say The Machine Girl), but I'm pretty confident Versus provided plenty of inspiration for the Sushi Typhoon collective. It's a film that isn't constrained by any genre boundaries. It mixes just about everything it thinks is suitable for a cool action flick. Take some big guns, a team of zombies, a few different martial arts styles and of course a couple of samurai. Blend everything together and you have captured the key elements that make Versus such a fun film. Excessive gore (though not up to par with current Japanese splatter films), crazy characters and a rather liberal take on what's physically and biologically possible are what link this film to current favorites (+ of course the presence of Tak Sakaguchi).

The story is pretty basic and serves as a mere hook to bring a vivid selection of characters together. First of all there is Prisoner KSC2-303 who just escaped from prison. He meets up with a bunch of yakuza crooks who managed to slip him out of his confinement. What KSC2-303 does not know is that the yakuza are led by his arch-enemy. Enter more yakuza, KSC2-303's love interest, two police guys chasing KSC2-303 and a small army of undead criminals and you should get the gist. There is a whole lot of fighting and acting tough, ending with the final showdown between KSC2-303 and his arch-enemy. Needless to say, you don't need to watch this film for its fantastic plot.

Versus' low-budget background is clearly visible throughout the film, but this didn't seem to bother Kitamura in the least. The image may not be as clean or crisp as can be, the camera work, editing and framing is simply awesome. Kitamura's camera is constantly on the move, finding weird yet imaginative angles and zooming through and past everything in its way (that includes human cadavers). If you do prefer a more glossy look you could check the remastered version (with also has some scenes re-shot from scratch) but since I've always watched the original I can't comment on the quality of that release.

The soundtrack consists of an eclectic range of action-oriented music. It's far from subtle and homogeneous, freely switching between cheesy guitar riffs and club-ready drum n bass. The thing is though that it works pretty well for each separate scene. It's not what you call a great soundtrack, but as far as supporting the different scenes goes it does the job considerably well.

The acting has similar issues. While the actors have plenty of charisma, some of them just can't act. It's not a big deal in this film, at times it even adds an extra layer of weirdness (the big police guy or the mad yakuza). Sometimes it even goes as far as to lend the film and the characters a very particular charm, but it's equally obvious that they weren't going to win any prizes with their performances. Even Tak Sakaguchi gets by more on charisma than on actual talent. Again, that's pretty much okay for a film like this as long as you don't expect anything more from it.

Even though Versus lasts a full two hours, the film stays fresh and exciting at all times. Kitamura put a lot of variation between the fight scenes, sprinkled the film with plenty of comedy interludes and comes up with smart and clever details at regular intervals. Versus is a true "win or lose" kind of film where the director is giving his all to prove his worth. It may be a bit uneven because of that, but the amount of creativity and passion on display easily trumps whatever negative points follow from Kitamura's lack of subtlety.

For a while Versus was one of my all-time favorite films, but the recent wave of Japanese splatter films changed things a little. Nishimura and friends go way beyond the madness on display in Versus, which makes Kitamura's film a bit less extreme and "out there" compared to when it was launched. It's still immensely fun and entertaining, but when it comes to gore and insanity there are better films out there these days. That's about the only real critique I have, apart from that Versus is still wildly hilarious and definitely worth you time.