Review: THE PIRATES! BAND OF MISFITS Amuses and Delights, Gently 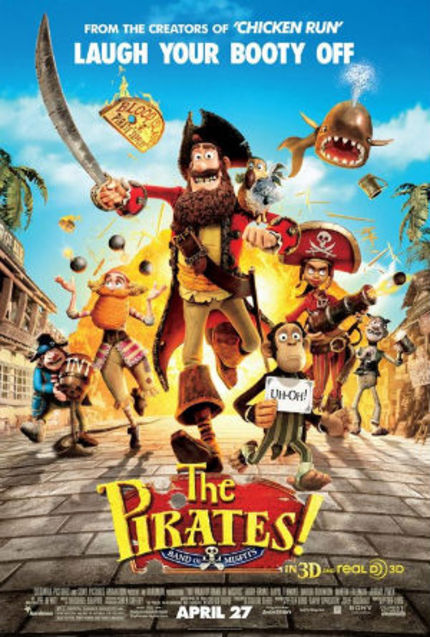 Peter Lord, co-founder of Aardman Animations, hasn't directed a feature film since he shared credit with Nick Park for Chicken Run a dozen years ago.

Still, his influence can be felt throughout most everything the company has produced, as becomes evident when watching The Pirates! Band of Misfits, adapted by Gideon Defoe from his own book The Pirates! In an Adventure with Scientists, published in 2004. (The film has already been released in other territories with the Scientists title.)

Stop-motion animation remains the playground of determined individualists, artists who are intent on conveying the broad range of variations available within the limitations of the medium. And the storytelling style promulgated by Lord through Aardman continues to be distinct: extremely dry humor; characters who are very proper; behavior that is polite; satire that is accurate yet kind.

Thus, The Pirates! is not the sort of picture that lends itself to convulsively funny pay-offs or gut-busting jokes. Instead, the characters speak softly, raise eyebrows slowly, and restrain their reactions. They are always pleasant company; though amusing in their observations, they refrain from making obvious jokes, and hesitate before poking too much fun at those who are less dignified / insightful / intelligent. They'd rather give the other fellow the benefit of the doubt.

The Pirate Captain (voiced by Hugh Grant) and his crew are a perfect embodiment of the Aardman ethic. The Captain refers to his crew members by distinguishing characteristics rather than names, simply because his memory for names is non-existent and the crew members are too polite to correct him; they are happy to be known as The Pirate with a Scarf (Martin Freeman), The Pirate with Gout (Brendan Gleeson), The Albino Pirate (Anton Yelchin), The Surprisingly Curvaceous Pirate (Ashley Jensen), and even The Pirate Who Likes Sunsets and Kittens (Al Roker).

The crew's genial spirit extends to overlooking their captain's obvious limitations in leadership and general smarts. He is, after all, a beneficient leader, a man who loves and appreciates his crew members, even if he can't possibly remember their names. The Pirate Captain is lovable in spite of, or perhaps because of, his imperfections, so the crew continues to support his unrealistic desire to be win an award as Pirate of the Year, even when it becomes clear that he hasn't a chance in the world; his never-say-die spirit is infectious, it seems. 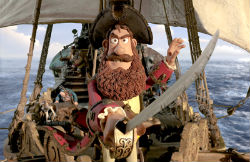 His prospects brighten, at least in his own eyes, when he comes across Charles Darwin (David Tennant), destroying his ship in search of booty. Darwin, who has trained a chimpanzee to be his Man-Servant (he communicates by flash cards), immediately recognizes that the Pirate Captain's odd-looking "parrot" is, in fact, a dodo bird, long thought extinct. And so off they sail to London to win a competition against other scientists and therefore gain enough booty for the Pirate Captain to win his long-sought trophy. First, though, they must dodge Queen Victoria (Imelda Staunton), who has a fierce hatred of pirates.

It's all rather silly -- of course!!! -- and the pace drags at times; The Pirates! never generates sufficient speed or suspense to become a thriller of any kind. (Also, a single element in the film that provides motivation for one of the characters is identical to a certain live-action comedy from a number of years ago, which deflated some of the fun for me.)

And here, perhaps, is where the stop-motion animation comes most effectively into play. The characters are, almost defiantly, an assemblage of individuals. The Pirate Captain's most notable feature, for example, is his "luxuriant" beard, which looks rather like thick thread, bunched into braids and somehow come to life to hang from the pirate's chin.

It's certainly not 'realistic,' but within the universe created by Aardman, it feels realistic because it's of a whole with the other characters, props and locations. No, change that -- it feels magical, because our head tells us a bunch of thread is not a beard, sticks of clay are not eyebrows, and so forth; it requires the ready suspension of disbelief, and that allows us (or at least me) to overlook the patchy spots.

By the end of the picture, it's apparent that The Pirates! Band of Misfits achieves what it sets out to do: amuse adults and delight children. And it does so in an incredibly endearing manner.

The Pirates! Band of Misfits opens wide across Canada and the U.S. on Friday, April 27.

The Pirates! Band of Misfits

More about The Pirates! Band Of Misfits