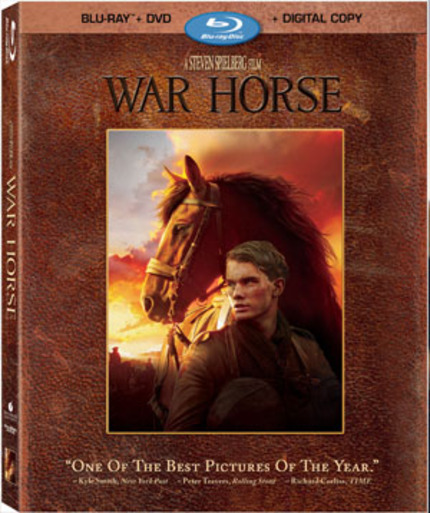 Judging the films that dominated 2011's awards season, it's clear that for many of the big guns there was a sense of unapologetic nostalgia running rampant. Hugo was a "love letter" to Meliés and the burgeoning of the cinematic art form, while The Artist unabashedly borrowed from both Keaton and Errol Flynn, creating a charming evocation of silent cinema's golden age.

Yet it was Spielberg who crafted what for some is a touching, moving, timeless work, while for others it's a dreary, manipulative, cloying work that's almost barbarically backwards in its tone and composition.

I'd suggest that War Horse is a bit of both. It's a "boy and his horse" movie, as Spielberg is often quick to point out, using the device of a single animal to tell an antiwar movie. As we gallop from story to (improbable) story, we find both good and bad in each side of the conflict, yet throughout it all we can find reflections of kindness and humanity in the almost preposterously expressive eyes of the titular character.

There are moments in this film that are as good as anything Spielberg's ever done. The masters of the 30s and 40s, working under specific codes restricting content, were often able to transcend the limitations with flourishes of dialogue or clever allusions to more political or libidinous issues. In crafting a modern "family friendly" war film, safely rated for most of the family, Spielberg has used some truly extraordinary cinematic tricks to convey his tale. Shots of riderless horses streaming over machine gun emplacements, a rotted, tattered windmill sweeping the screen to cheekily hide an execution, or even the weave of cloth fading into the mounds of a plowed field - Spielberg demonstrates his often overlooked skills as a gifted visual storyteller.

Yet if the deft visual touch of the film and the extraordinary sequences of warfare are to be lauded, there's a whole heap of melodramatic nonsense that must be swallowed along with it. The clichés and anthropomorphizing of the animals in the film must be accepted as readily as the convenience of the lead characters breaking into song in a musical. If you think for more than a moment, one more weepy shot of the poor, rain-soaked beast huffing away in order to fulfill the (preposterously complicated) verbal commands of his master/trainer would be little more than laughable.

Still, settling into what can only be considered a classical pace, we have here the closest yet that Spielberg has come to living up to a pretense of being a modern John Ford. With the final shots illuminating our characters with a burnt orange, we're left with a sepia-like monochromaticism. The film has been drained of all other colours, becoming, basically, a kind a classic that was always shot in expressive black-and-white palate. Classic cinema was littered with clumsiness and clichés, but it also brought forth sublime bursts of experimentation and well-earned emotional catharsis.

It's far too early to tell if this will stand as one of Spielberg's great works. On first blush, I think it fits squarely in the middle, below genre classics like Jaws and Raiders, or Catch Me If You Can, Schindler's, Private Ryan, or Munich, and way, way above the dreary muck of Amistad. I'd compare it to Spielberg's other flawed, half brilliant, half mad film that also owed much to Kubrick: A.I.

There will come a time when we no longer get a new Spielberg films on a regular basis (with Tin Tin we got two this year), and, frankly, that will be a true tragedy for any movie fan. The man has been one of the most prevalent voices in moviemaking for decades, and while not always on mark, his works demand attention in much the same way as those classic filmmakers who crafted films of unequivocal popularity yet infused with their own, unique creative visions.

The near-magical trio of Spielberg, John Williams and Michael Kahn can't be around for too much longer, but if War Horse is to be seen as indicative of what the old boys can still come out with, I think it's something that any serious lover of cinema is duty bound to contend with. 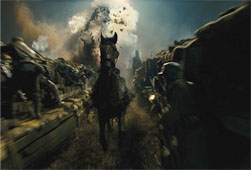 Disney's done a really weird thing with the release of this film - there's a 2-disc Blu-Ray/DVD combo pack (in the regular, taller DVD case) that includes one disc of film and some supplemental materials. The only slightly more expensive 4-disc set includes a second Blu-Ray with considerably expanded documentary material, and a digital copy disc with activation key.

The video is as excellent as you'd want it to be, with most moments of softness or shimmering almost certainly the result of Spielberg's insistence on shooting on good ol' film stock. Janusz Kaminski is a master of light and shade, but here he's allowed to be even more bold with his colour choices, from the opening pastoral scenes to the bold colours of the finale. The scenes of war are suitably dank and horrifying looking, but read very well on disc.

The 7.1, lossless soundtrack, with sound design by Gary Rydstrom, is absolutely a showcase for your system. Beyond the clanking of tank innards or the thumping of hundreds of horses at full charge, there's the more subtle natural noises that have been orchestrated as carefully as William's score. The whinnies and snorts of the horses alone are expertly shaped to convey wide ranges of emotion and personality from the animal participants (more on this below).

I didn't bother with either the DVD or Digital version, but, really, why would you? This is the kind of discs that you have home theatres for in the first place.

It's no secret that Spielberg has long been against doing commentary tracks for any of his films, yet it remains a real shame. It also means that the associated documentaries have to do the heavy lifting regarding his comments about the work, and when they're as relatively superficial as the ones included here it's made all the more frustration. Strictly from the point of view of posterity we're being denied a critical and detailed examination of his works in real time, but it's unlikely this review's going to change his mind on the matter.

"I'd never directed horses before, except for them to sit under Harrison Ford" - Steven Spielberg


In this brisk, 20 minute documentary, the key (human) actors gather at what looks to be the Charlie Rose set to talk about the "humanity" of the film. We begin with hugs for all around, and it plays like a kind of cast reunion usually reserved for decades-later retrospectives. We get some nice comments, such as that they actors didn't do a usual "boot camp" style training session because they were then almost as ill prepared as those that went to fight in the Great War themselves, but little else. The enthusiasm borders on the saccharine, just as in the feature, but it's also quite charming the way they talk about the story and the equine participants.


Halfway through, Spielberg and producer Kathleen Kennedy remain seated while the actors are replaced with the key production crew. Here we get very little detail, save for a few tasty behind-the-scenes tidbits, but the mutual respect of all involved is made perfectly manifest over...and over again.

In just three minutes, we get a slight taste of the real magic of filmmaking, where we follow "background performer" Martin D. Dew who plays half a dozen different character, from townsperson to both Brit and German soldiers, as part of an ensemble of a hundred or so utility players on the shoot.

I could have watched an entire feature length doc from the perspective of these guys, but, alas, this tidbit is all we're granted. 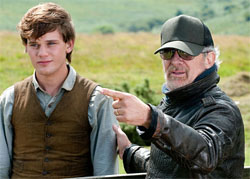 Running just over an hour, this is the heart of the supplementary material, relegated to a bonus disc only included with the more expensive set. The documentary follows the sequence of the narrative rather than the order of shooting. We travel from from the moors of England to the trenches of the Somme, tracing the film's production along the way. There's talk of the adaptation from the stage to screen, the inclusion of the book's narrative bent, and so on. It's an enjoyable watch, but again, like the film itself, it could have been much more. We get glimpses of the training and filming of the horses, but little more. Instead, the themes of the story are talked about again incessantly (they're not exactly opaque in the narrative). It's an important thing to have, and certainly one of the highlight's of the package, but not exactly the finest in making-of documentary.

"This is a lyrical film requiring a lyrical response... More like playing a concert than fitting the film." - John Williams


A 9-ish minute appendix to the Journey doc, we find the yeoman-like creative partners for Spielberg giving some insight into their craft. Naturally, John William's work is easier to demonstrate, with orchestral sessions showing the recordings of the very fine score. Kahn again seems not quite comfortable with discussing his work, but as something a bit more technical than the longer doc, it's a welcome addition.

The Sounds of War Horse (Disc 2)

Now, here's something I would have loved an entire feature length look into as well. Sound designer Gary Rydstrom (if you don't know the name, look up his credits and be astounded) comes back to the Spielberg fold to create some pretty astonishing sonic landscapes. Sure, the booms and blasts of the period weaponry are fabulously rendered, but before this little doc, and as a resolute sound nerd, I hadn't really appreciated the work that went into creating "vocalizations" for the sounds of the horses. Rydstrom discusses the way he'd shape the performances with subtle sound cues, the tiny elements that are near subliminal in our comprehension of a given scene. Great stuff, and I would have traded more of this for almost every other element on the disc.

Through the Producer's Lens (Disc 2)

Like Bruckheimer, who seems to carry an even more impressive Canon rig, it seems these Hollywood producers like Kathleen Kennedy have so little to do with when shooting starts that they can wander around with a still camera taking hobby pics. In this 4 minute doc that amounts to a slideshow, there are some nice, if not particularly noteworthy snaps.

War Horse may not be considered one of Spielberg's finest works, and its heart-on-its-sleeve, gee whiz attitude may be more off-putting to cynical movie goers than any film of his since E.T.

Still, with a lovely video image, a decent if slightly disappointing set of supplements and a ridiculously excellent sound mix, War Horse should certainly be part of your home media collection.