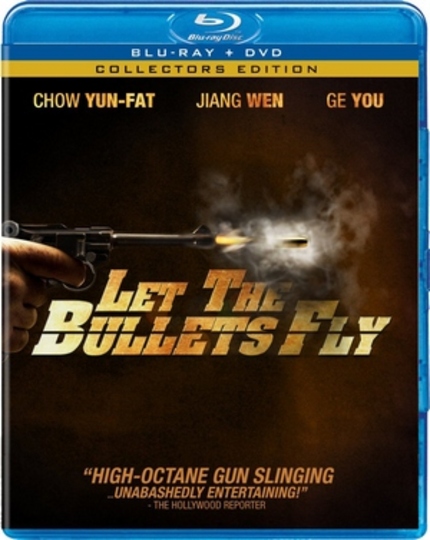 Let the Bullets Fly was the first film I saw at Fantastic Fest last year. I specifically left my home in Dallas during the morning rush hour so that I'd roll up in Austin just in time to collect my credentials and take my seat in the Alamo South Lamar. By the time I arrived, I'd spent four and a half hours with my butt planted firmly in the driver's seat, suffered through Dallas'  horrendous morning crowd, and I was going to be damned if I'd miss this film. The film runs well over two hours, and one might wonder if all of this driving torture was worthwhile when, at best, it results in my transferring my already numb butt cheeks into another seat for 135 minutes.

Jiang Wen's Chinese box office champ is a powerhouse film, mixing comedy and action in roughly equal doses to achieve a fantastic mix that reminds me, vaguely, of Edgar Wright's Hot Fuzz. Now, I wouldn't necessarily rank Bullets above Hot Fuzz, and they are tonally quite different, but the action/comedy mixture is potent in each. Most of the promotional material, including Well Go's trailers, have sold Bullets as a straight action film, but I think that this sells the film short, as it was really the comedic elements that helped ease me through the extravagantly long run time. However, both work well, thanks in no small part to an abundance of talent both in front of and behind the camera.

Pocky Zhang (Jiang Wen) and his band of thieves knock over a train with intentions of looting, only to be foiled by a lack of loot. However, on board they find Ma Bangde (Ge You), counselor to the now defunct new governor of Goose Town. In order to overcome their poverty, Zhang and Ma concoct a plan to loot Goose Town from the inside out. What they don't expect is local heavy, Master Huang (Chow Yun Fat), who stands in their way at every turn. Zhang and Huang wage a war of wits for the future of Goose Town, and therein lies the story.

I'm not much good at synopsizes, but there you have it. Obviously, at 135 minutes, a lot goes on during Let the Bullets Fly. Rather than fighting a simple gun battle to determine supremacy, Zhang and Huang decide to play a figurative game of chess, with each trying to out think the other. The result is a wonderfully boisterous film filled to the brim with clever turns, humor both broad and subtle, and outstanding performances from all the leads.

Most of the criticisms I've seen leveled at Let the Bullets Fly directly involve the film's length, which I don't find to be much of an issue. There are always bits that could be cut out of a film, but I feel that even the stuff that feels the most like filler, which isn't much to me, contributes to the overall vibe of Bullets. Some complaints could be made about the quality of the CG, but I found it only momentarily distracting in context. Jiang's film is ambitious, and it succeeds on multiple fronts, and most definitely proves that mainland China is not entirely fixated on producing prestige propaganda films.

I really enjoyed Let the Bullets Fly, in case you couldn't tell. Jiang Wen, Chow Yun Fat, and Ge You are absolutely incredible in their roles, with each filling their niche with ease and grace. The technical aspects of the film, apart from the occasionally sketchy CG, are equally remarkable. The film boasts a fantastic score from Ghibli regular Joe Hisaishi (My Neighbor Totoro), some excellent visuals, and extremely evocative and effective editing. Yes, the film is long, but to be honest, I didn't feel a bit of it, maybe it was the numb butt cheeks.

This one is a definite recommendation.

Well Go USA presents Let the Bullets Fly on two different editions. The first is a barebones Blu-ray/DVD combo pack with only trailers, the second is the collector's edition which includes about an hour of extra materials included on a separate DVD. This review concerns the latter. The film looks remarkable, and presumably as good as Jiang would have wanted. My only qualm about the transfer is occasional blooming in the whites, which lose detail from time to time. That sounds bad, but I only saw it because I was looking for it, and it only appeared once or twice. Apart from that, this is a typically excellent disc from Well Go. The audio is equally superb, with a bombastic DTS-HD 5.1 track that will rock your home theater during the action sequences, and kick your sub's ass from time to time. A quality presentation.

The collector's edition includes about an hour's worth of bonus material spread out over two sections on the included DVD. First up is a "Making Of", which consists of a 15 minute featurette that reads like an EPK, and features a lot of brief interview snippets with the principals. Following that is about 20 minutes of what appear to be webisodes that average around 3 minutes each and repeat much of the footage from the EPK. More substantively, the disc includes about half an hour of interviews with screenwriters for Let the Bullets Fly which are quite informative and reveal a lot about the evolution of the project. There are talks of dozens of rewrites and lots of tweaking to make Bullets into the film Jiang Wen wanted. Some really good stuff, there.

I know that not everyone shares my positive opinion of this film. If you're sensitive to swings in tone, or extended running times, you might want to rent this first. However, if you're up for some good action and comedy with fantastic actors, definitely check out Let the Bullets Fly!