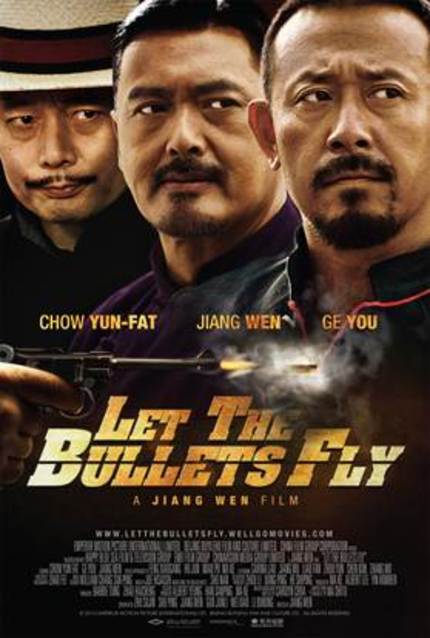 The time has come for China's highest grossing feature ever to land on US shores.  Jiang Wen's Let the Bullets Fly is coming to selected theaters and VOD this March 2nd, and to get you pumped, Well Go has delivered their red-band theatrical trailer for this rollicking good time!

I was fortunate to catch Let the Bullets Fly at Fantastic Fest last year, and I really enjoyed it.  The film runs a little bit long, but I've gotten used to that with Asian features in the last few years.  The all-star cast of Jiang Wen, Chow Yun Fat, Carina Lau, and Ge You make for a great team on screen, and keep the plot rolling along nicely, in addition to numerous fantastic action and comedy set pieces.  Here's what Well Go has to say about Let the Bullets Fly

IN THEATERS MARCH 2, 2012
In the lawless land that is rural China in the 1920s, legendary bandit "Pocky" Zhang (Jiang Wen) and his gang stage a train robbery. They are quite unhappy to discover that instead of silver, the only thing left on the train is the con man, Tang (Ge You). Desperate, Tang explains that he's on his way to Goose Town, where he's bought himself a governorship. If allowed to live, he will help Zhang assume the governorship in his place... where Zhang can make more money in one month as a corrupt politician than he can in a year's worth of train robberies. With Tang as his prisoner/counselor, off they go.

But neither realizes that Goose Town is already under the iron rule of the wealthy Master Huang (Chow Yun Fat, The Killer, Hard Boiled), whose charming exterior conceals a ruthless, conniving crime lord. As Zhang begins to see how badly Huang oppresses the citizens of Goose Town, he decides to do something about it, and Huang quickly senses a major threat to his empire.

Thus begins an escalating series of hyper-violent (and hilarious) mind games between the bandit and the crime lord, while the devious Tang tries to play both sides until he can exit the situation...preferably with a profit. The stakes quickly rise to ludicrous proportions in this masterfully vicious, pitch-black action-comedy (China's highest grossing film of all time), and you'll be laughing the entire time as double- and triple-crosses, razor-sharp wordplay, and hundreds of thousands of bullets explode across the screen.