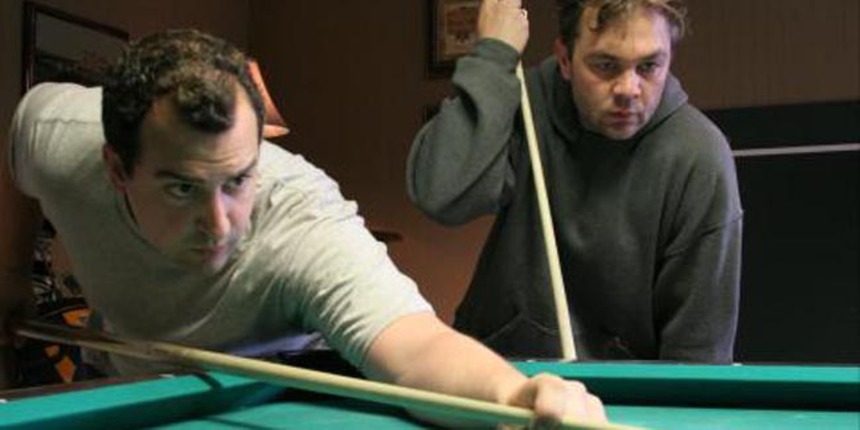 It's hard to argue, at this point, that Jay and Mark Duplass have not come into their own. The two brothers now have several feature films under their belts, and have only grown into more refined and mature artists as they've aged. In the endlessly enjoyable The Do-Deca Pentathlon, the two brothers are operating inside of the kind of story they do best: insane people doing insane things to one another.

Mark (Steve Zissis), a high-strung family man, takes his wife and son up to his mother's house for a relaxing birthday weekend. Plans for a stress-free vacation are spoiled, however, when Mark's semi-estranged brother Jeremy (Mark Kelley), an unattached professional poker player, shows up sans invitation. In his childhood bedroom, Jeremy discovers a tape of the titular contest, a 25-event competition meant to decide, once and for all, which brother reigns supreme. The tape in question has been erased (perhaps intentionally) by the boys' mother, and after some pressing, Jeremy convinces Mark to a rematch, re-sparking a vicious rivalry that has clearly existed between the two since childhood.

The small scale of the film allows the Duplass brothers to channel most of their energy into immensely well-crafted characters. Each and every principle in The Do-Deca Pentathlon is at once real and likeable. Mark's wife Stephanie could easily come off as an overprotective shrew getting in the way of the male bonding session, but Jennifer Lafleur does wonders with a relatively small role. However, it is the two leading men who steal the show. Jeremy and Mark are hilarious together as two man-children of very different stripes, bouncing off of each other with lightning quick wit and very physical performances that conjure up images of what the two might have been thirty years prior.

Avoiding typical Hollywood tropes, neither brother is tragically flawed or singled out as the "crazy" family member who yearns for acceptance and/or teaches everybody else about life. Jeremy seems like an obvious choice to take on the "fish out of water" role, but instead, Kelley gives a stunning performance, turning the wilder of the two men into a weary but charismatic loner who may just be beginning to tire of the lonely life. Mark is no less an overgrown child, but his arrested development is made manifest in the opposite fashion: instead of being loud and overcompensating, Mark is perpetually wounded and skittish, forever afraid of what might imperil his station in life, whilst being strangely cavalier about his status as a married man and father. As the story progresses, we gradually see that the two brothers very much envy what the other has, a standard enough trope that is made fresh and poignant by a tight script that drifts elegantly between the comic and the tragic. The shifts in tone are so subtle that we are caught off guard, in the best of ways, by the third act, when the true severity of Mark's condition and the rift between the two brothers begins to peek through the cracks of the rollicking, boys-will-be-boys comedy.

At its heart, The Do-Deca Pentathlon is about insecurity, and the hairline fractures it can form between even the closest of loved ones. While undeniably hysterical, this film is not a nihilistic echo chamber in which laughs rattle around, hollow and empty, nor is it a heavy-handed commentary on the disintegration of the family unit. In this film, everybody loves each other, and that love is readily apparent on the screen, making the laughs all the more affirming and the disappointment and failings all the more heartbreaking. This film accomplishes what has largely eluded American comedy for decades, and the Duplass brothers deserve nothing but praise for their stunning achievement.