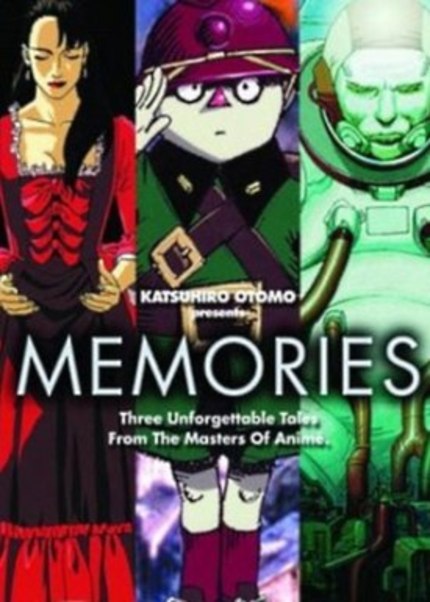 For 10 long years Memories was Studio 4°C's best kept secret. It took the film almost a decade to appear in the West and by that time it just wasn't the technical bombshell it was supposed to be. When it appeared over here Memories was still able to competed with the best animes out there, but now the aging process is starting to take its toll on the film. That said, it's still one of the most superb anime anthology projects to date and one that begs to be seen.

Studio 4°C is without a doubt Japan's most interesting animation studio. They've been producing mind-blowing animation projects (Genius Party, Genius Party Beyond, Tekon Kinkurito) ever since they were co-founded by Koji Morimoto, constantly pushing technical and artistic limits and giving directors carte blanche to bring their vision to the screen. Commercial work (ads and music videos) pay the bills while anthology projects offer the world a glimpse of the diversity of Japanese animation. Memories is one such anthology project and probably one of the most prestigious undertakings of Studio 4°C so far.

For a very long time, Magnetic Rose (the first short, directed by Koji Morimoto himself) was my absolute favorite short film. The short starts simple enough, with a crew of space garbage man receiving an sos call and moving in to investigate. Once they arrive at the wrecked ship they are in for quite a surprise and the further they go, the more mysterious the setting becomes. The build-up of Magnetic Rose is incredibly strong, detailing a mysterious journey in a very limited amount of time while making sure the audience remains engaged at every single turn. What else would you expect though, the story was written by Otomo himself and scripted by the late Satoshi Kon.

The soundtrack is striking too, as is usually the case in Morimoto's films (I guess that's one of the benefits of being a dj in your spare time). Yoko Kanno handled the music and provided a very fitting score, mixed with beautiful excerpts of the Madame Butterfly musical. Visually the short is starting to show some small cracks though. Character animation and background design are still superb, but the coloring and CG shots are starting to betray the film's age and can come off as subpar in places. The film also lacks a strongly unique style to counter this. That said, Magnetic Rose is still one hell of an emotional ride with plenty of beauty to uncover.

The second film (Stink Bomb) is directed by Tensai Okamura, famous for directing Wolf's Rain (and doing the episode direction for Anno's immensely popular Evangelion series). Not really my kind of director and so it should come as no surprise that I would rank Okamura's short the least interesting of the anthology. That doesn't mean there isn't plenty of fun and joy to be found in Stink Bomb. It starts off a little slow, but once rockets start flying and tanks start crashing into each other Stink Bombs turns out to be a pretty fun roller coaster ride.

The very atypical jazzy soundtrack is the only thing that sets it really apart from other films. It sounds a little awkward at first, but multiple viewings reveal its fun and differentiating nature. Visually things are once again richly animated, but the 80s style visuals in a 90s anime feel weird and unfitting. When watching Stink Bomb I'm often reminded of Otomo's Roujin-Z, not really my idea of a appealing art style. Still, the short is a fun ride with some memorable scenes and a nice premise, perfectly suited to act as an entertaining bridge between Morimoto's and Otomo's shorts.

The only short to really escape the aging process unscathed is Otomo's Cannon Fodder, mostly due to its completely unique art style. Bold strokes, rough coloring and distorted perspectives make for a visual feast. Not only that, the entire 30-minute short is edited to appear as one single shot (one-take), following a single day in the life of a young kid, inhabiting in a strange and single-minded world. The boy's hometown is wrapped in a perpetual war with a neighboring city and the whole town is forced to participate in this meaningless war. Both cities just fire huge bombs at each other, but the actual enemy is never seen and the enemy's attack are strangely abscent.

Otomo really flexes his muscles here. Everything from art style to animation, soundtrack and story are neatly integrated to form a stunning little short. There's even an interesting bottom line that says a lot about human conditioning. Cannon Fodder is clearly the short that comes out best after 15 years of fighting the competition. It's still as unique and fresh as when it first appeared, and while I preferred Magnetic Rose the first few times I watched Memories the tables seem to have turned in favor of Otomo's Cannon Fodder.

That leaves me just one thing, which is the awesome outro music. Not often do you hear true techno music as part of an original score (again, this must be Morimoto's influence), the outro track is a pretty excellent stand-alone techno track at that. It's the perfect closure for an impressive set of short films. Time is slowly taking away some of the impact of Memories, but there is still plenty of beauty here to keep you amazed for the entire running time.