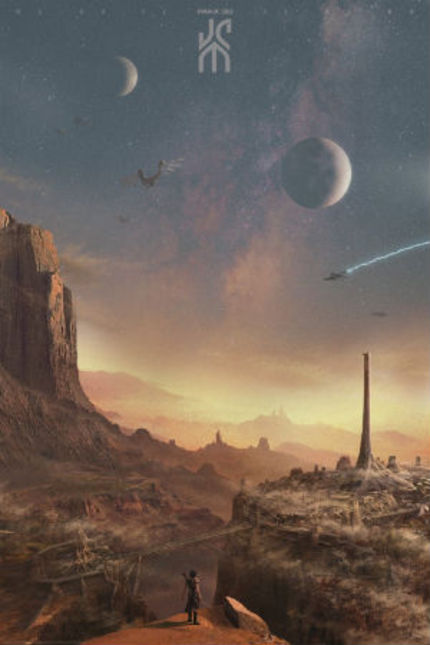 John Carter is an intriguing throwback, a fun little ride and a fantastic (if early) kick-off to the 2012 big-budget blockbuster season. Drawing on an initial source that's more than a century old, its narrative tropes have been mined for dozens of other works. A project first brought to screen in the 1910s, the Burroughs-authored series of books has shaped everything from 50s science fiction to Star Trek to Star Wars to Raiders of the Lost Ark. What results in this latest telling is a modern, mega-budget Disney production that feels somehow derivative of a whole heap of other films and genres, yet manages in its own way to be a charming, thrilling ride.

The film starts with a brief aerial dogfight, dropping us into a kind of steampunk flying machine world. Mars is made to look like some bleached spaghetti-western desert, with the winged and sprocketed contraptions doing battle almost like ships in a pirate film.

We're then quickly thrust into 19th century New York, as a young Edgar Rice Burroughs is called to town to settle the estate of a beloved uncle. We're then abruptly placed into another setting, a post civil war milieu where Southerner rogue Carter is captured by a Northern army in order to use his services with the new unified calvary. While being chased on horseback by local Apache -- adding yet another genre to the first reel! -- Carter finds himself in a cave where he accidentally transports himself across the solar system.

The film's actually quite adroit at keeping the viewer situated as we fly from locale to locale. Too often, complicated setups such as these leave the audience simply impatiently waiting for the "real" movie to start, but Stanton's direction and a clever script (and some lovely jumpcuts) maintain interest through the entire introductory tease. By the time Carter sets down on the Martian plains, where he's able to leap great heights due to the lowered gravity -- a nod to the likes of Superman -- we've come to appreciate this brash scoundrel.

We can then meet the key Martian cast, mostly drawn from various HBO masterpieces. When you've got the lead from The Wire going up against both Caesar and Anthony from Rome, it's enough to make any "it's not TV, it's HBO" nerd blush. Besides, why not throw sand-and-sandal epic into yet another genre that the film can mine for thematic development?

What follows, after this very turbulent beginning, is an extremely straightforward yet pleasing going home story, a kind of Oz quest with the protagonist trying to find a way back., On the way, he's joined by a band of warriors, a trusty (and only slightly obnoxious) dog-like creature, a princess who's avoiding marriage (The Princess Bride?), and other quotations of various action plots that continue throughout the work.

What's remarkable is that while this melange of seemingly every film trope imaginable is mashed together, it all works pretty damn well. Stanton brings his experience as a director at Pixar to a live action project for the first time, and it results in some excellent interaction between human and synthetic elements. The Green men remind of Genonosians from Attack of the Clones, yet fight like the Gungans in The Phantom Menace. And I mean this, believe it or not, in a good way - there's something almost comforting in the way the film never winks at the audience, doesn't play up laughs for ironic sake or litters in contemporary pop culture pabulum to seem relevant.

Sure, there's loads of gobbledygook about symbols and fancy words for what Martians call Earth, but it never gets in the way of the story, the way, say, the weight of turgid nomenclature and unending exposition sinks the early episodes of Game of Thrones like a stone.

Taylor Kitsch plays Carter with the the right amount of glistening hubris, and a capable cast, including the curvy Lynn Collins, reteaming with her co-star from X-Men Origins: Wolverine, and often seen in a Slave Leia-like outfit that's sure to be a hit at next year's Comic-Con.

Visually, the film is a treat, with glowy ships and multi-armed green men, fine character animation mixed with a subtle realization of the 3D space. Drawing from what other Pixar productions have done, the film drops any gee-whiz, in-your-face 3D for simply giving us a sense of depth and scope in the worlds brought to screen. While I saw it at a relatively small theatre for the press pre-screening, I have no doubt that on the full glory of the IMAX canvas the show will shine particularly brightly. I also think those who truly despise the recent renaissance of 3D will still find that it adds a certain something to this tale without interfering with your enjoyment of the work.

John Carter does well to not treat its audience as imbeciles, nor does it shy away from what amounts to a couple hours of spiffy images and derring-do. It plays like an impeccable cover version of a song you can't quite put your finger on, a thoroughly enjoyable take on old fashioned epic adventure movie making. Forget talk of budget and sequels and marketing concerns, just go in, turn off the cynical part of your brain, embrace your inner 12 year old, and bask in the time spent with Mr. Carter and friends on the Red Planet.