Blu-Ray Review: The Shabby, Hastily-Constructed Future and Ideas of IN TIME 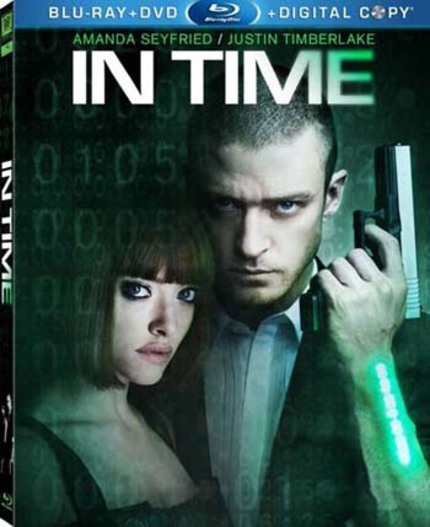 This isn't precisely a review of writer/director/producer Andrew Niccol's sci-fi misfire In Time but I will be discussing my opinion of this terrible movie and how a poorly-envisioned and articulated concept of the future can completely derail any potential the material might have possessed.

In the case of In Time, it's some indeterminate point in the future where time itself has been made into a commodity, which each person's lifespan acting as a currency once they reach 18 years of age, with the haves amassing decades, even centuries of time and the have not's literally living day-to-day. Also, everyone's genetic clock is set so that they are perpetually 25. As far as high concepts go it's not terrible (maybe a bit on the nose, but we can get past that). It's in the execution and the elaboration of those plot elements, in realizing some of the implications of the pitch, and even the look and feel of the future where In Time feels less like a movie and more like a quickly assembled jumble of ideas thrown on the screen.

Starting with the basic of idea of time as a commodity, the hook in the film is that you're able to "spend" your time through a green, LED-style clock in your wrist which constantly ticks down the remaining days, hours, and minutes that you have left to live. There are quite a few scenes of characters panicking as their times steadily count down to their last minutes and seconds. As a system of currency goes, it's far less convenient than say, a wallet since if you're mugged, your assailant can simply grab your wrist and take all of your time. In theory, it creates high stakes situation among the slums where gangsters are willing to take extra time off your hands if you're not careful. In practice, it's a pretty dumb system that probably wouldn't have gotten beyond the design stage by whatever mad scientist came up with it.

Similarly problematic are questions of how inheritance and transferred wealth work on a global scale. In some of the more ridiculous scenes, we see banks where our leads Justin Timberlake and Amanda Seyfried (both actually much better and more charismatic than the material they're trapped in here) rob banks containing devices that contain time on them, but all transactions in the movie are done directly (wrist to wrist or wrist to the standardized, clunky money scanners).

I know I seem hung up on this detail, but it speaks to just a lack of anyone on the In Time production putting even the barest thought into how their world work.

Now consider a counterpoint, something like Logan's Run or Children of Men: both have pretty simple starting premises (a world where no one is allowed to age and a world where no new children are born, respectively) and in each case the plot hinges on shocks to those respective systems (what if some people want to get older, what if a child is miraculously on the way).

Now let's think about In Time: in a world (and you're free to read this in ominous narrator voice) where time is money (ugh) one man gets a lot more money-time. Then he loses all of his money-time, then he starts robbing banks and giving money-time away. And the police--um, Time Keepers--want to stop him because he's going to bring down the system by causing inflation. He keeps robbing banks, presumably causing more inflation, then end.

Niccol (who also wrote and directed the far smarter Gattaca) doesn't seem to know what to do with his concept or the world he's created. Even at the basic level of how it looks and feels (it's like L.A. except cars have matte finish and LEDs in their grills), In Time is incredibly thin. Back to our counterpoints, Logan's Run and Children of Men: the former is (initially, at least), brightly-colored, the population regimented by bright colors, all of the living spaces looking bright, shiny, and impersonal like the world set up in the movie; then there's Children which is more or less our now, albeit with a ton more terrorist attacks and partitioned-off sections for refugees. It's the plausible, near-future future so it doesn't really require any flourish. But then you look at In Time and there's elements sort of cobbled haphazardly from other fiction, and some of the fashion is contemporary while other clothing is 30's retro, the cars mostly all look alike but they have a jet engine sound for some reason. And on it goes.

I'd encourage you to avoid In Time because of how thoroughly it misses telling any kind of interesting story with its basic setup or or sidesteps fleshing out its world in favor of a quick stab at an action movie and a lot of time-related puns (I'm half convinced the movie was sold as a time-related pun generating device). It's completely inessential and feels like (ugh) a waste of time for anyone involved.

In Time is available on Blu-ray, DVD, and VOD now.

Do you feel this content is inappropriate or infringes upon your rights? Click here to report it, or see our DMCA policy.
Andrew NiccolJustin TimberlakeOlivia WildeShyloh OostwaldJohnny GaleckiActionSci-FiThriller

More about In Time