Hollywood Grind: IN TIME and the Quest for "Originality" 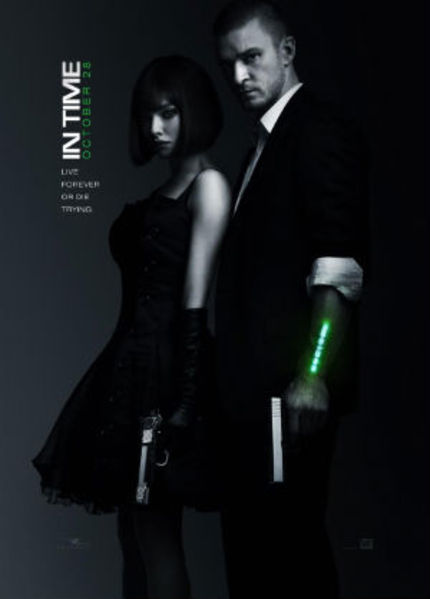 Right around the time I started reading less science fiction, I found myself watching more science fiction movies. It was post-Star Wars, post-Close Encounters of the Third Kind, and the studios were becoming friendly toward science fiction again, making it possible for Star Trek to make its initial, stilted leap to the big screen, and for The Black Hole to fulfill its title creatively, and for Alien and The Thing to creep and crawl their way into our subconscious.

Pre-Star Wars, however, my perception was that science fiction only rarely strayed onto cinema screens, which made every film something to be sought out as quickly as possible, which explains why my friends and I rushed out to see Logan's Run in the summer of 1976. The movie was "not very science fiction," as we teens, all experienced readers of science fiction, adjudged it, though its modest display of the female anatomy became one of the more formative instructive experiences of my chaste life. (Thank you, Jenny Agutter!)

Based on a 1967 novel by William F. Nolan and George Clayton Johnson, Logan's Run imagines the 23rd Century as a post-holocaust world in which the inhabitants live in a beautiful domed city that resembles nothing so much as a modern-day shopping mall. (Which is where it was filmed, in part.) Life is filled with pleasure until one reaches the age of 30, at which time citizens enter the ceremony known as Carousel, where they obstensibly have the chance to be reborn. Those that rebel and refuse to enter Carousel voluntarily are hunted down and executed by the Sandmen.

The movie, with a screenplay credited to David Zelag Goodman, departs from the novel, not only with the upper limit to life (age 21) and how that life is ended (basically, through suicide), but even more significantly in its third act, not coincidentally an increasingly sluggish excursion into maudlin sentiment that slowly chugs off the rails. Stubbornly, it remains a sentimental personal favorite, though even on its first viewing my friends and I recognized its severe limitations as a movie.

A remake has been under development for more than a decade, with names from Skip Woods to Bryan Singer to Joseph Kosinski to Carl Erik Rinsch, among others, attached over the years. The latest news is that Nicolas Winding Refn will direct with Ryan Gosling attached to star. We'll see what happens with that. 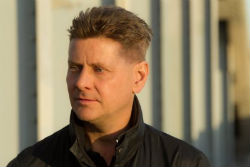 A few years before the remake rumblings began, New Zealand-born Andrew Niccol began to carve out his career in Hollywood. He established himself as a director of television commecials in the UK, moved to Hollywood, drew interest with his script for The Truman Show, sold that, and moved on with another original screenplay, Gattaca, which he directed, following that up eventually with S1m0ne, Lord of War, and now, six years later, In Time, opening wide in the U.S. on Friday.

The In Time synopsis certainly bears a surface resemblance to Logan's Run: "In the future people stop aging at 25 and must work to buy themselves more time, but when a young man finds himself with more time than he can imagine he must run from the corrupt police force to save his life." I haven't seen the film yet, but I'm hoping that the story will play out quite differently than Logan's Run, and that the execution is superior as well.

Niccol addressed the question head-on at Comic-Con this summer: "In Logan's Run, from what I remember, you die at a specific age. In our movie, it's exactly the opposite, where you can live forever. There's good news and bad news. The good news is you stop aging at 25 years old. The bad news is you have one year genetically engineered into your gene code, and so now you have to buy more time and make more time. However you can steal more time, you can do it. So, I think it's very different from that. I don't think they even had genetic engineering when Logan's Run was made." (Note: Genetic engineering began in 1973 with experiments on bacteria.)

And herein is the catch, and one reason that it's so hard to be "original" in Hollywood. Hypothetically, let's say that Niccol never saw or heard of Logan's Run before he dreamed up his own idea, which he had for "x" number of days, months, or years, perhaps inspired by something else entirely. (Niccol has referred to the thematic genesis being "the theme of immortality and the desire to live forever. The film is also the child of Gattaca.") He wrote something up, or he pitched it verbally, and at some point in the process, someone said, "Hey, that sounds like Logan's Run," to which Niccol might have responded, "What? No, that's my idea."

The wise agent / producer / studio executive / lawyer would say, "Hey, we better make sure we're not liable for anything." And that lawyer(s) would review, and liability would be considered, and some higher-up person responsible for such things would say, "No, we're cool, we're OK, it's not the same thing."

Any film that has any shot of making money is ripe for someone else to claim that their idea (or book or unproduced script or conversation in an elevator or idea they thought about while in proximity to someone remotely connected to the production) is being ripped off, so the prudent people in suits try to avoid those kind of problems.

Certainly there have been enough cases in which creative people actually were ripped-off to make almost everyone suspect, but, perhaps naively, I don't believe that's true for the majority of "original" projects that make it to the screen, whether in Hollywood or elsewhere in the world. Maybe I believe in fairy dust, too, but, there you go.

After all, just because you've read or seen or heard about a movie or book or TV show (or whatever), that doesn't mean that everyone else on the planet has, even those who are seeking to write or direct a movie along similar lines. And even if someone in the creative process did, at one point, read or see or hear about something similar, that doesn't necessarily mean they intentionally ripped off someone else's idea. Memory is a tricky, unreliable thing, and it's easy enough to believe you dreamed up a genuinely original idea when it originated with someone else.

But I think that's another reason why the studios are reluctant to deal with original properties, though not as big an issue as the overriding desire to stick with properties that have already demonstrated they can work elsewhere, either as a movie (albeit in another langage) or as a book or as a TV show, or even, God help us, as a line of toys. When in doubt, stick with what's been proven, rather then sticking your neck out for something untested, no matter how great it reads or sounds.

As for Andrew Niccol, he will be facing an entirely different set of questions about "originality" with his next project: He's remaking The Host.*

* UPDATED 11/25/11 1:44 pm: Thanks very much to commenters for pointing out my mistake! Niccol is not remaking Bong Joon-Ho's monster movie, he's adapting Stephenie Meyer's book. 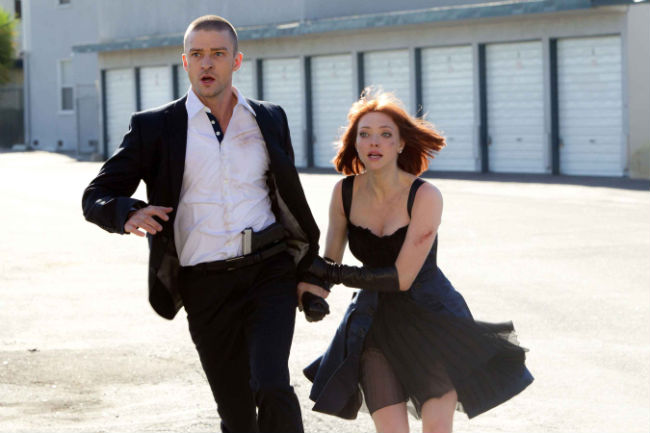 Do you feel this content is inappropriate or infringes upon your rights? Click here to report it, or see our DMCA policy.
Andrew NiccolJustin TimberlakeOlivia WildeShyloh OostwaldJohnny GaleckiActionSci-FiThriller


More about In Time