LIFF 2011: THE WHISPERER IN DARKNESS review 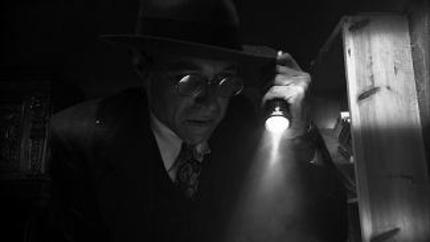 The Whisperer in Darkness is a fan film through and through - an enthusiastic celebration of a subject a core group of believers think is just awesome (classic, literary-minded horror fiction from one of the fathers of the genre). It's also a hokey, ragtag mess prone to amateur hamming it up and held together in places by shoestring production values. The first full-length feature from the H.P. Lovecraft Historical Society, after their debut short The Call of Cthulhu, The Whisperer is definitely more than 'just' for the fans, but its origins are too often frustratingly obvious.

As well as the obvious love for their idol's work propelling things along, there are some surprisingly clever attempts at stretching out a limited budget and playing to the strengths of the material, which give the movie a far more professional air than your average YouTube demo reel. At the same time, while The Whisperer definitely has that matinee spirit, all stiff upper lips and trembling spitcurls up against unimaginable evil, there are plenty of times it trips up - be it a shaky effect, comical art design or a performance dashing madly over the top, it still falls flat. This is a film that deserves more than internet sales and convention play, but still one that bears some reservations.

The Whisperer opens with dread portents - torrential rain falling in the backwoods of Vermont circa 1928 and strange, inhuman corpses washed up in pieces by the rivers thereabouts. Albert Wilmarth (Matt Foyer) is a local academic called to debate the provenance of these sightings, taking up arms for science against Charles Fort, a well-known spokesperson for theories advancing the existence of the fantastical or bizarre. Without any solid proof, Wilmarth sticks doggedly to his position this is all ignorant rural superstition, despite the other man running rings around him in front of a jeering crowd.

But then a young man tuns up claiming his father is making a last stand at a remote farmhouse, surrounded by the creatures night after night, jealously guarding an ancient stone icon he snatched from their lair. Seized by a fever of anticipation at photographs and audio recordings that imply these things might actually be real, Wilmarth agrees to venture out into the hinterlands to find out from the farmer what exactly is going on - but predictably, the letters the old man was sending turn out to be telling only a fraction of the story.

Anyone who's ever read any Lovecraft should be nodding sagely at this point. The venerable author dreamt up a cold, heartless universe in which the Earth was nothing more than a shiny bauble to be fought over by huge, godlike creatures of pitiless savagery where only the slightest of barriers - physical, magical, whatever - held them back. All of which made for some tremendously frightening meditations on the futility of existence in the face of certain death, all that good stuff, but also for a series of genre tropes forever played so baldly straight they could easily be taken for comedy.

The Whisperer adheres so firmly to the template Lovecraft set out it's a rolicking good time that's frequently genuinely eerie, in a 1940s radio play sort of a way - but in its pious muttering about ancient beings from beyond the stars it also veers all too often into kitsch. Some of it is clearly intentional - other passages, not so much. Even the most talented professionals have trouble carrying this kind of thing off, and while the Society put a great deal of effort in they're simply not completely up to the task.

The decision to shoot in crisp black and white might seem like a cheap dodge, but it's actually one of the film's strengths - director Sean Branney falls back on the odd piece of stilted composition or awkward camera movement, but The Whisperer is largely an eye-catching, visually engaging film which rarely feels lazy or cheap (as opposed to low budget). Some of the FX are surprisingly polished, and the obvious ambition behind them gives even the shakiest some proper impact. Foyer turns in a solid performance in the lead - a little too nervy to exert outright star quality, he's still a likeable, if flawed hero it's easy to get behind.

But while it's always an entertaining watch The Whisperer is sometimes less a fevered nightmare and more a small child's awkward doodles. Once we cross that fine line between the horrific and the absurd, the chief antagonist is ridiculously obvious, prone to bouts of moustache-twirling in by far the worst performance in the film. The final ongoing set piece is laudably ambitious, but also frustratingly cardboard - the villain's costume is especially laughable - and the ultimate direction the story takes, while pleasingly bleak, is hardly a surprise to anyone who's been paying attention.

A labour of love, for sure, but Branney and his crew are still clearly making any number of jarring rookie mistakes, or cutting corners way too crudely. All the same, there's real talent here; The Whisperer may well be a long-form fan film, but its sense of adventure and craftsmanship still shame any number of big-budget studio productions. It's an experience, like listening to a stentorian narrator reading a forgotten pulp classic through ancient, crackling speakers on a dying stereo. Sometimes it makes you laugh when it really shouldn't, but there are moments too when it runs a cold needle of fear through your spine. If that sounds like a good time - and you can take some fairly rough edges - consider The Whisperer in Darkness recommended.

(The Whisperer in Darkness was screened as part of the 25th Leeds International Film Festival, which ran from 3rd-20th November 2011.)