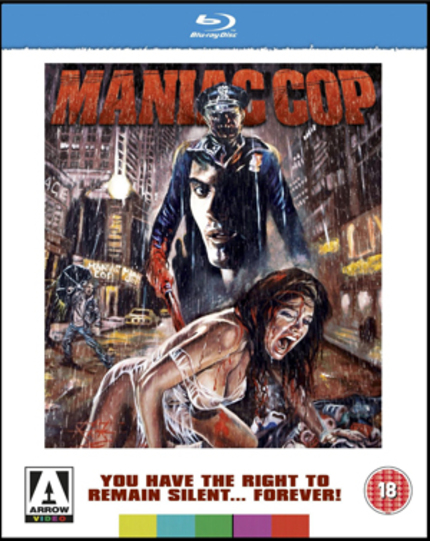 The eighties were a magnificent time to be a sleaze merchant in the movie business, and among the finest of the breed was William Lustig. Lustig, who had made a name for himself directing the brutally unpleasant Maniac, teamed up with exploitation legend Larry Cohen to bring this story of a psychotic former police man slaughtering innocents to the screen. These two guys, in combination with the all star cast of a young, fresh looking Bruce Campbell, horror stalwart Tom Atkins, and unforgettably jawed Robert Z'Dar, delivered one of the last great exploitation moments of the '80s before the real thing died away. Arrow Video in the UK are the perfect venue for Maniac Cop, and their awesome A/V combined with some neat exclusive bonus material makes their version of this film on Blu-ray the one to buy.

When reports come in of a man in a police uniform committing gore drenched bloody murder on the city streets, officer Jack Forrest (Bruce Campbell) stands accused. Now, with few friends, powerful enemies and a psychopathic slayer still at large, it's up to Jack to prove he's not guilty and bring down the killer. Now, Arrow Video brings the Maniac Cop back from the 80s video vault to stalk the night time streets once more, looking for fresh victims...

Maniac Cop does exactly what it says on the tin.  There's a big, brutal, psychotic murderer on the loose in New York, and he's wearing the uniform of the boys in blue. Cohen and Lustig take a page from Jaws and set these horrific events only days before a big parade. In order to keep the city under control, the police commissioner, played here by a very commanding Richard Roundtree (Shaft), tells the force not to leak the possibility that the suspect might be one of them. The show must go on!

The story revolves around two men, a beat cop named Jack Forrest (Campbell), and a detective named Frank McCrae (Atkins). Forrest gets run in for his estranged wife's murder and unfortunately his alibi leaves him looking like a huge asshole, so he initially takes the fall. McCrae is the salty old vet who knows the truth, but can't get anyone to listen. Together they chase down the facts and try to wrangle the superhuman Maniac Cop, however, it isn't that easy.

Lustig's picture was never going to win any awards. While Atkins and Campbell give relatively cheese-free performances, their co-stars aren't quite as subtle.  Jack Forrest's girlfriend is played by Laurene Landon, whose performance is so over the top it almost negates any kind of credibility Campbell builds during the course of the film.  Her mania is only barely eclipsed by that of Robert Z'Dar as the titular Cop, although Z'Dar has the excuse of being a Maniac. Z'Dar has no lines in the film, he merely grunts and bares his teeth, but his unique visage is unforgettable, and it's no surprise that he went on to make two more of these films after the first.

This is the kind of film that makes me miss the eighties.  I may have been a kid, but I certainly remember stuff like this showing up on TV late at night and played plenty of catch up at my local rental store as a teen in the '90s. The cheesy synth score, the filthy New York that no longer exists, the half assed production design that substitutes real world grime for set design.  It's a thing of beauty.  Maniac Cop may not be the greatest of these films, but it is probably one of the last of its breed and well worth preserving.

Arrow Video in the UK and Synapse Films in the US released near simultaneous editions of Maniac Cop from the same master material this fall. The image quality on both discs is superb, and far better than the film has ever looked on home video.  There are is no invasive print damage, and only minor stability issues during the opening credits. The image is about as sharp as one might expect, with very nice color reproduction.  The image shows no signs of digital manipulation and seems faithful to its source. The audio is an LPCM 2.0 uncompressed original stereo track. The Synapse edition sports a DTS-HD MA 6.1 surround mix, but I can't imagine there being much difference.  I like the idea of the original audio being present, and it sounds good.

As usual, Arrow Video provides a feast of bonus material into which we can dig. High Rising Production, the usual extra production house, provides three very interesting interviews that say a lot about the people involved even beyond their words.  Tom Atkins is a warm and ingratiating interview and a person who seems genuinely chuffed at the reception he receives from horror film fans.  He is pleasant and unassuming and gives plenty of background detail on the shoot for this film as well as his genre film career in general. Laurene Landon, on the other hand, is a somewhat megalomaniacal convention jockey with an inflated sense of self-importance, if this interview is to be believed. Her estimation of her own career is generous to say the least, but she does impart a few interesting tidbits, I prefer Atkins, I must say. The last interview is with Maniac Cop mastermind, Larry Cohen.  Cohen talks about his career from the beginnings of exploitation up through the present day with particular focus on this collaboration with Lustig.  His recounting of the pitch meeting he held with Lustig is a classic and just goes to show that they don't make movies like the used to.  All three interviews are well worth your time.

The other big advantage of the Arrow Video disc is the packaging and physical extra material.  In this case we get custom art from Rick Melton who does all of Arrow Video's Argento covers, along with three other choices for display.  In addition there is the massive and bewildering Arrow Video catalog that practically pulls money from my wallet by osmosis. There is also the booklet, which in this case holds one essay from author Troy Howarth on Maniac Cop that is worth reading, and an interview with Lustig from High Rising's Calum Waddell that focuses on Lustig's first feature, Maniac. All of these supplements are well worth checking out.

Arrow Video comes back from a couple of rough releases (Tenebre & The Bird with the Crystal Plumage) with a winner in Maniac Cop.  The disc and all extras are completely region free, so I suggest you grab this one as soon as you can!  Highly recommended!