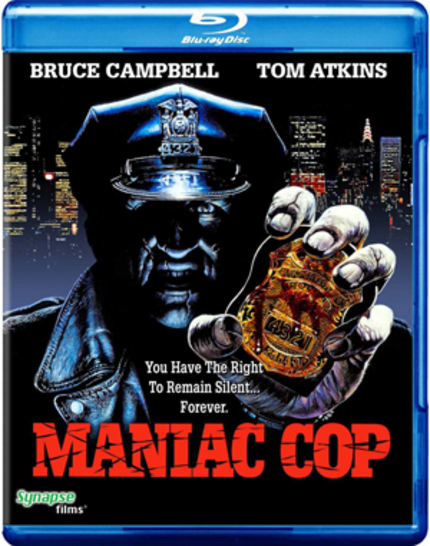 It is a great time to be a cult film fan!  A few weeks back we reported on the upcoming Arrow Video Blu-ray release of William Lustig's Maniac Cop, well now we in the US have our own to look forward to.  The almighty Synapse Films are releasing Maniac Cop on Blu-ray this October 11th with exclusive special feature.  This is just one of several new Blu-rays in the pipe for Synapse, the other two hopefully coming by the end of the year are The Exterminator, which we've already announced specs for, and the as yet undated Frankenhooker disc, which has me really stoked!  Here are the details on Maniac Cop from Synapse:

Innocent people are brutally killed on the streets of New York by a uniformed police officer. A young cop, Jack Forrest (Bruce Campbell, TV's BURN NOTICE and The EVIL DEAD Trilogy) finds himself marked as the chief suspect after his wife is murdered. As Lieutenant Frank McCrae (Tom Atkins, DRIVE ANGRY and LETHAL WEAPON) investigates, the death toll rises and he suspects a mysterious police cover-up. This "maniac" cop must be stopped, but it might not be so easy. He seems inhuman, and ready to take on the entire police force, hell-bent on revenge! Restored and remastered from original vault materials by Synapse Films, MANIAC COP looks and sounds better than ever in this brand-new 2011 high-definition transfer, featuring newly remixed DTS-HD Master Audio surround sound! Long considered a classic of the horror genre, MANIAC COP was written and produced by Larry Cohen (IT'S ALIVE, PHONE BOOTH) and directed by William Lustig (MANIAC, VIGILANTE)

Also coming soon is 2008's South of Heaven, a film about which I know nothing, but here are the details and the cover art for you: 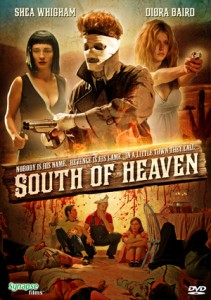 A FILM THAT DEFIES THE GENRE AS WELL AS EXPECTATIONS, SOUTH OF HEAVEN IS A BOLD ANTI-HERO ORIGIN STORY STEEPED WITH ATMOSPHERE AND ULTRA-VIOLENCE! When Roy Coop finished his stint in the Navy, he only had two things on his mind: seeing his brother Dale, and writing the great American novel. What he gets, however, is the homecoming from Hell! A pair of violent vaudevillians (NAPOLEON DYNAMITE's Jon Gries, and Thomas Jay Ryan) mistake him for his brother, looking to collect on a debt he didn't know he owed. Eight fingers later, Roy is burnt to a crisp, forged by fire into a new man. Roy is dead. Nobody is born. Now it's Nobody's turn to have his wicked revenge, and to save his brother before it's too late. Wrapped in bandages and ready for blood, Nobody is determined to kill those that gets in his way, even the murdering masochist named Mad Dog Mantee (Shea Whigham, MACHETE and HBO's BOARDWALK EMPIRE). Dodging bullets and dodging dames, Nobody meets the nasty ne'er-do-wells Lily (Diora Baird, THE TEXAS CHAINSAW MASSACRE: THE BEGINNING) and Veronica (Elina Lowensohn, SCHINDLER'S LIST). In this wonderful neo-film-noir, violence and vengeance are sure to meet in a little town they call... South of Heaven.

Pre-order South of Heaven on DVD at Amazon