J Hurtado
Editor, U.S. ; Dallas, Texas (@HatefulJosh)
Tweet Post Submit
The sleaze-merchants at Arrow Video are at it again with a new round of announcements for some of the finest filth on Blu-ray and DVD this fall.  We'd previously mentioned Arrow Video's Maniac Cop Blu-ray release, but now we have the full details on what looks like a stellar edition of this exploitation classic.  Next up we've got a couple of upgrades from Arrow's vault with Erik the Viking and The Cheerleaders, coming here in new editions with Erik sporting great new custom cover art from Graham Humphries, along with bountiful extras and The Cheerleaders also coming with new extras.  Last on the list is The Devil's Kiss which comes with a newly commissioned collector's booklet, like all ArrowDrome releases. There's a lot to announce, and they've taken the time to make up a quality press release with all the details, so I'll leave them to it: 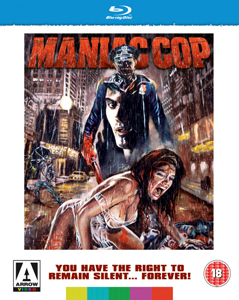 Notorious video nasty creator William Lustig and B-Movie legend Larry Cohen return to the dirty streets for a unique high speed collision of the slasher movie and police thriller in Maniac Cop , a blood splattered tale of brutal cop vengeance from beyond the grave.

When reports come in of a man in a police uniform committing gore drenched bloody murder on the city streets, officer Jack Forrest (Bruce Campbell) stands accused. Now, with few friends, powerful enemies and a psychopathic slayer still at large, it's up to Jack to prove he's not guilty and bring down the killer.
Now, Arrow Video brings the Maniac Cop back from the 80s video vault to stalk the night time streets once more, looking for fresh victims... 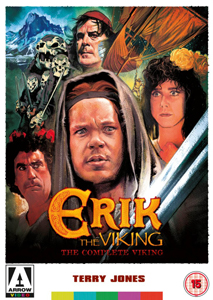 Erik the Viking: The Complete Viking (Arrow Video)
Be There Or Beheaded

In the age of Ragnorok, when all the earth has been laid waste by snow and ice, one Viking must take his men into battle against the very gods themselves in order to bring back the sun.
Meet Erik (Tim Robbins), the world's most sensitive Norse warrior, a man with little time for pillage and no taste for rape. Erik killed a girl once and he feels very badly about it. Erik isn't really like the other Vikings but now he must take his warrior clan to the gates of Valhalla itself, braving harsh seas, terrifying creatures and horrifically atonal singing along the way.
From Monty Python star Terry Jones comes an hilarious Viking satire that proves you can fight the Gods and still have a good time.

ERIK THE VIKING: THE DIRECTOR'S SON'S CUT SPECIAL FEATURES:
- The Director's Son's Cut: Professional Editor and Terry Jones' son Bill Jones' cut of Erik the Viking , an edit of the film supervised by the director representing his original vision of the film
- Audio commentary with director Terry Jones
- Interview with Terry and Bill Jones
- Photo Gallery 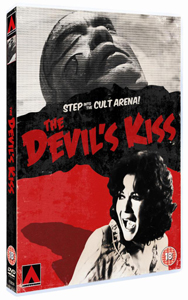 One kiss dragged the dead from their graves...

Claire Grandier is a medium with one thing on her mind... Blood drenched vengeance. She's a psychic black widow who'll stop at nothing to destroy the Duke De Haussement, the man she holds responsible for her husband's untimely death.

After charming her way into the creepy basement of the Duke's crumbling castle on the promise of revealing occult secrets, she sets to work with a sick professor and a twisted dwarf, creating a demon-possessed Frankenstein zombie who's programmed to Kill! Kill! Kill! in this demented and mixed up Spanish classic.

Wild 70s fashion and fashionable devilry collide with every cliche in the gothic horror manual for a wild ride into sleazy retro Euro-terror. Prepare to feel the wicked caresses of Satan...

ARROWDROME IS A FLEAPIT SELECTED LIBRARY OF CULT FILMS; VIOLENT, HORRIFIC, SLEAZY, EXPLOITATIVE. TO EXPLORE STEP IN TO THE CULT ARENA! EVERY ARROWDROME RELEASE INCLUDES A REVERSIBLE SLEEVE OF ORIGINAL ARTWORK AND A COLLECTOR'S BOOKLET! 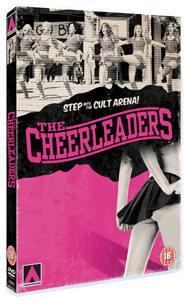 They'll do ANYTHING to win!

Debbie may have done Dallas, but the girls of Amorosa High are game enough to take on the whole country in The Cheerleaders , a classic 70s sex comedy where the laughs come thick and fast and the gym knickers come off even quicker.

For the bold and brassy girls of the cheerleading squad, taking one for their football team comes naturally so when rivals need to be taken down, there's only one solution... seduce them into exhaustion. Now the game girls are on a sex-crazed mission to ride their rivals to victory in a politically incorrect comedy that shocked the world!

ARROWDROME IS A FLEAPIT SELECTED LIBRARY OF CULT FILMS; VIOLENT, HORRIFIC, SLEAZY, EXPLOITATIVE. TO EXPLORE STEP IN TO THE CULT ARENA! EVERY ARROWDROME RELEASE INCLUDES A REVERSIBLE SLEEVE OF ORIGINAL ARTWORK AND A COLLECTOR'S BOOKLET!

Pre-order Erik the Viking on DVD at Amazon UK

Pre-order The Devil's Kiss on DVD at Amazon UK

Pre-order The Cheerleaders on DVD at Amazon UK