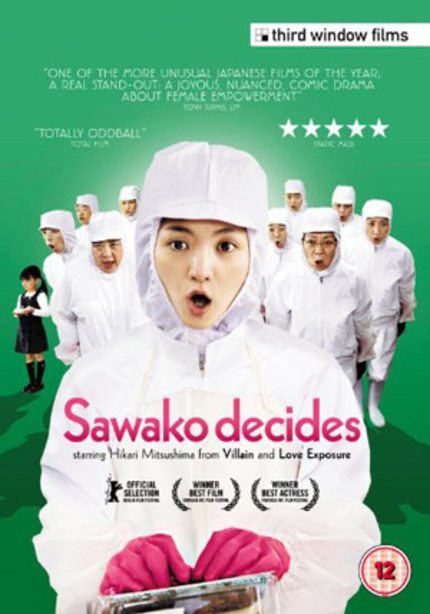 Back in July I reviewed Sawako Decides ahead of its UK theatrical release.  Since I rewatched it and my opinion hasn't changed I'm reprinting that review and adding comments on Third Window's DVD edition at the bottom.  Spoiler alert: I love the film!

Sawako has lived in Tokyo for five years, is working her fifth office job, and is dating her fifth boyfriend, who is also her boss at the office. Her life with Kenichi, her boyfriend, and his daughter from a previous marriage, Kayoko, feels like a "compromise," and she endures each day feeling distressed about her career and love life. One day, she receives word that her father, Tadao, who runs a freshwater clam processing business in her hometown, has fallen ill. There is a reason why Sawako would rather not go back home so easily, but she reluctantly decides to return at Kenichi's insistence. But Kenichi, who had actually quit his job shortly before Sawako, uses this opportunity to come along with Sawako to her hometown with his daughter in tow. Thus Sawako's ordeals continue. Still, she takes over her father's clam processing company and begins to work there.

Sawako has a shitty job.  She tolerates it because she really doesn't think she deserves any better.  She is abused by her boss and by children on a daily basis.  But she accepts it all as her lot in life.

Sawako has a somewhat lame boyfriend.  Kenichi's a nice enough guy, but you definitely get the feeling that she has settled, and her attitude reflects it.  He has a daughter from a previous marriage, Kayoko.  Kayoko doesn't like Sawako, she doesn't hate her either, she just ignores her.  Sawako accepts it all as her lot in life.

One day Sawako gets a call from her uncle that her father is dying, the uncle begs her to come home.  There is a bit of history with Sawako and her hometown that makes her very hesitant to accept his invitation, but eventually, at the urging of Kenichi, she goes.  This starts a transformation of Sawako.  Sawako the limp noodle who accepts her fate as unchanging and unchallengeable won't last long back home, something has to change, and it is her.

Sawako Decides is a slow burn.  The film is a comedy that doesn't pummel you over the head with funny in fits and starts.  It takes its time.  It sets up and develops characters and situations.  It gives everyone in the cast breathing room and room to evolve, even the supporting players.  There are multiple plots threads weaving throughout the film.  Sawako and Kenichi, Sawako and Kayoko, Sawako and her father, as well as Kenichi and Sawako's childhood friend, and the complicated relationship between Sawako and her whole upbringing.  All of these plot threads are well-developed and given the time and space to naturally evolve and resolve.

The film hangs on the delicate shoulders of lead actress Hikari Mitsushima as Sawako.  Her previous appearances in ScreenAnarchy friendly films like Love Exposure and Kakera will not necessarily prepare you for what she's able to pull off with Sawako Decides.  Her Sawako is the Sun around which the universe of Sawako Decides revolves.  If she goes dark, the whole thing collapses.  Fortunately for us, she takes this role and makes it her own.  She plays the downtrodden and defeated Sawako with grace and conviction.  It isn't easy to make such a depressed character not depressing on film, but we are engaged with Sawako and her life, even if she isn't.  She juggles her relationships with confidence, and we are left spellbound by how bad she is at life.  Her performance is once of the finest I've see this year, and that's saying a lot for someone whose character is largely unlikable for most of the film.

I would have been happy with just the sort of slice of life comedy that Japan has become known for when people aren't too busy shooting geysers of blood everywhere.  This is a classically low key Japanese comedy, in line with the Juzo Itami school of filmmaking.  Sure, there is an energetic climax, but even it is relatively understated, with the exception of a rousing musical number that nicely sums up the entire film in about three minutes.  One thing I didn't expect from Sawako was the level of emotional engagement and attachment I found myself feeling for the film and its characters.  When Sawako Decides, I got a little bit of a chill. Sometimes it's nice to watch the losers win a game.

Third Window's presentation of Sawako Decides isn't going to knock your socks off, that it what the film is for.  The image is presentable and the sound is good, but neither are reference quality. However, I believe that this has a lot more to do with the film's low budget origins than with the quality of the transfer.  This was never going to look like a blockbuster, but I wasn't terribly distracted, so I'm calling it a win.

There are a couple of extras on this disc that are exclusive to Third Window's DVD.  The first is an extremely brief introduction to the film from director Yuya Ishii, this is less than a minute.  The other major extra is a nearly 30 minute interview with Ishii that is very enlightening.  There is a strange audio buzz behind some of this interview (which is explained in a caption prior to the interview), but I found Ishii more engaging than the noise, so it's not the end of the world.

Sawako Decides is a film that is awesome in its low key take on the pain of mediocrity and the will to overcome.  Highly recommended!