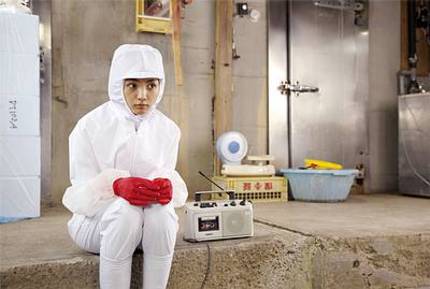 [Our thanks to Alexander Thebez for the following review.]

SAWAKO DECIDES is probably one of the best chick flicks I have ever seen, ever.  This existential, nihilistic film is a lot of fun and also oddly comforting. The film follows Sawako (Hikari Mitsushima from LOVE EXPOSURE), an average girl on her fifth job, fifth boyfriend, and fifth year in Tokyo.

Sawako is indecisive. With a lot of self-esteem issues, everyone around Sawako seems to be rather intolerable, including her inept boyfriend, who is obsessed with knitting when he is not busy making useless toys for a living. Sawako's life is unimpressive, if not mildly depressing. Things turn complicated when Sawako is forced to deal with her past when her father falls ill. Left with no choice but to come home, Sawako finds herself surrounded by people who disapprove of her presence. Unfortunately for Sawako, she is the only one who save her father's clam packing business, and the town that depends on it.

Hikari Mitsushima is wonderful in this movie. She is quite spot on when it comes to playing Sawako's vulnerable, sensitive nature. Aside from believable Mitsushima's Sawako is also totally hilarious. Sawako is slightly pathetic, but completely sympathetic without being overwhelmingly helpless.

Mitsushima is in good company in the film. Every single character that has any semblance of impact on the plot is memorable. The world that Yûya Ishii conjured in the film is filled with very proud, sincere characters that possess a strong sense of dignity. So, although most of them are humble in their social stature, the characters in the film are not the kind you'd push around. While the film's title carries Sawako's name, Ishii doesn't shy away from allowing the other colorful individuals in the film to have their own moments.

Director Yûya Ishii has crafted a very different indie drama here, especially when you contrast it to its American counterparts.  Sawako Decides is not romantic and in a lot of ways, not very encouraging. The aesthetic of the film is modest. The dreary environments reflect the stale existences of the characters, adding even more cynicism to the already existential atmosphere of Ishii's script.

The film's dry, deadpan humor requires a lot from its audience. Often, the jokes are not exactly funny, at least not in a predictable way. The hilarity in the film comes from the absurdity of the characters and how they behave and react within unflinchingly realistic situations. The film is not glamorous but that does not mean that it does not get crazy and slightly over the top.

Just like Sawako herself, the film simmers slowly until it finally blooms into a glorious, slightly mental, outburst (which appropriately involves a musical number). Sawako Decides is one of those movies that prove that comedies, when done right, can be smart, profound, and moving without being vapid or manipulative. While the slow building pace of the film may turn some people off at first, I promise you, Sawako Decides will reward you and take you to a joyful place if you let it.

SAWAKO DECIDES is screening on July 1st  (6:45 PM) at the Japan Society as parts of both the 2010 New York Asian Film Festival and the Japan Cuts screening series. To buy tickets checkout www.subwaycinema.com!