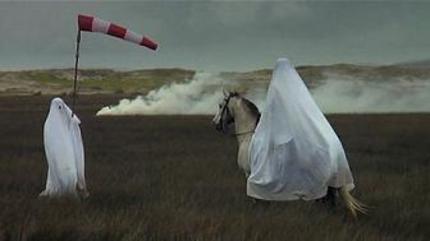 Sometimes, with films, 'individual' means 'too bloody weird for its own good'; less distinguished or distinctive, and more so wrapped up in its own cleverness only the person who dreamt it up can properly appreciate the thing. Finisterrae is a little from column A, but an awful lot from column B - a gorgeously shot, amusingly playful little piece, to be sure, but so flagrantly bizarre most people who check it out will probably reach the end credits wondering what the hell they just watched.

Two ghosts - represented by people with sheets draped over their heads - decide they're fed up with the afterlife and want to become human again. In order to do this, apparently, they need to follow the Way of Saint James through an empty world to the cathedral of Santiago de Compostela, and then to Finisterra, where they can rejoin the living. Various symbolic obstacles sacred or profane pop up as they track through the wilderness, and they repeatedly have to decide whether they want to see the journey to its end.

There are definite undertones of classic literature to all this, but the first overly weird thing about Finisterrae is it really doesn't seem to be taking its grandiose premise that seriously. Yes, this is a film where the principal actors spend their entire screen time hidden by bedsheets, but director Sergio Caballero (co-director of the Sónar Music Festival in Barcelona) is either a whimsical soul or has a fairly odd concept of how best to stir an audience's imagination.

A valkyrie in sports kit serves as an oracle in the middle of a barren wasteland; the ghosts bed down in a cave that looks like a dusty museum exhibit, where one of them gets a visit from a succubus; the kinder, gentler of the pair can speak to animals, for some reason - there's some sense of progression, and an ending of sorts but generally Finisterrae feels more like a succession of wry vignettes that go on until Caballero decides he's run out of ideas.

It's gorgeously presented, anything but cheap, with DP Eduard Grau (A Single Man, Buried) turning in some exceptional compositions with a wonderfully cinematic colour palette. And to be fair to Caballero, you could hardly call Finisterrae pretentious. He's clearly having too much fun conjuring these little sparks from his subconscious, like the sight of one ghost charging through snowdrifts on horseback to the tune of Suicide's Ghostrider (groan).

But the whole thing simply lacks any real direction, which feels like a major shortcoming. Pretentious or not, for a story that explicitly makes reference to one of the most famous Christian pilgrimages in history you'd expect there to be more of an impetus behind the narrative than turns out to be the case. Asking audiences to take it or leave it is all very well, but Finisterrae gives you very little reason to take it.

Everything is sketched out in broad strokes, lacking in fine detail and never making the effort to actually engage the viewer. There's nothing anyone could easily relate to actual human experience; there's neither any real character development, nor any proper conflict to test it if anyone did go through any meaningful change. There's no sense of place at any point on the ghosts' travels; even Santiago de Compostela doesn't carry any dramatic weight, and Finisterra itself doesn't feel like an ending.

Admittedly acting as if it was all tremendously important would probably run just as much of a risk of driving people away. Either way you can't help but feel even if Caballero had tried that approach and screwed it up, ended up with a dry, portentous life lesson, at least the appeal would have been a little more obvious. As it is, at best way too much of Finisterrae feels like the kind of highbrow art installation you know someone will enjoy, but you can't think who. At worst, it feels like an indulgence.

Finisterrae is definitely individual in that it's hard to think of anything you could compare it to, but other directors have experimented with the things that make Caballero's work stand out - a story that make little or no logical sense, and/or a wilfully personal artistic vision - and produced far better films. Even something as disastrous as Lee Myung-Se's incoherent visual language in M (2007) still hints at a talented creative trying to communicate something they feel strongly about. Finisterrae in comparison is largely insubstantial, eighty minutes with all the lasting impact of a dream.

It's hard to criticise something that's so atypical, but ultimately that's all you get here: weird for the sake of it. Finisterrae barely feels like a film, and not simply in that it doesn't follow a conventional three-arc story structure, answer every question it asks or anything like that - it just comes across as Caballero's idea first and foremost, with virtually nothing to let anyone else in on whatever he was thinking. If you like the sound of that and think you can get some sense out of it, go ahead, but such an oddity is difficult to recommend.

(Finisterrae was screened at the 25th Leeds International Film Festival, which ran from 3rd-20th November 2011.)

Do you feel this content is inappropriate or infringes upon your rights? Click here to report it, or see our DMCA policy.
Sergio CaballeroPau NubiolaSanti SerraPavel LukiyanovYuri MykhaylychenkoFantasy