The Teaser For John Gulager's PIRANHA 3DD Is Here 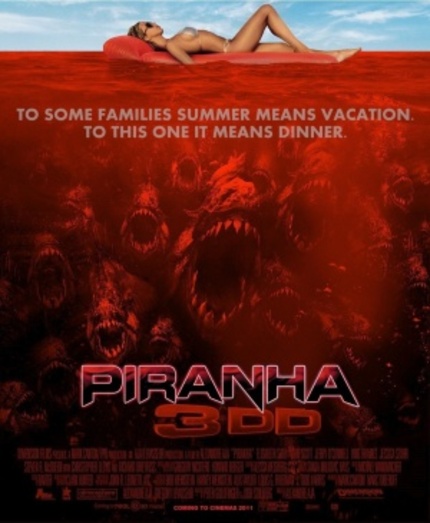 And it kinda just looks like more of the same...

I dunno, I'm not exactly sure what I was expecting, but this isn't it.  Piranha 3DD brings back several cast members from the first film, including Ving Rhames, who was presumed dead after the first film, Paul Scheer, whose character simply disappears and is forgotten in Piranha, and Christopher Lloyd, hopefully reprising his very solid "Doc Brown"ish performance from Piranha.  This time around we also get Katrina Bowden (30 Rock, Tucker & Dale Vs. Evil) and Gary Busey, as well as David Hasselhoff as himself.

Piranha 3DD is directed by John Gulager, who also did the first Feast film, which wasn't half bad. Unfortunately, he is also the director of the next two Feast films, which were less successful. However, his experience on that first film shows that he knows how to successfully mix gore and comedy, which is crucial to making this film work.  I hope I'm wrong and this is better than these initial thirty seconds are leading me to believe.

The latest report is that this film, which was scheduled to release at the end of November, has now been moved to a date TBD in 2012, which is never a good sign. I've got my fingers crossed, I really want this to be good considering how much I enjoyed the first one, but Gulager is no Aja.

Decide for yourself, the first 30 seconds of Piranha 3DD footage is below: