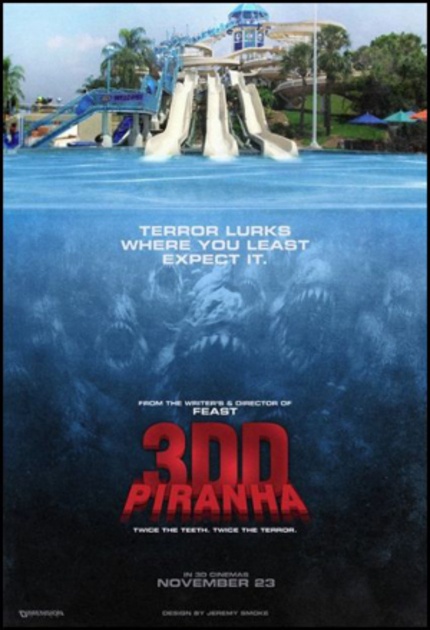 Our first glimpse at Piranha 3DD came a couple of months ago with a G4 exclusive 30 second teaser. I thought it looked pretty standard, but nowhere near as exciting as the first film.  Well, Dimension has cranked it up a notch with their new full length trailer for the John Gulager directed sequel of Alexandre Aja's surprise 2010 hit.

The new trailer for Piranha 3DD features more of the stuff I know I wanted to see.  We get more piranhas, so that's always a bonus. We get more Christopher Lloyd doing his best Doc Brown, which was among the best parts of the first film. We get more Ving Rhames leg-cannons, which looked a bit hokey at first, but are certainly growing on me. Finally, of course, we get more bouncy babes, which is what this film is all about. Overall, I get a much better feel for the film from this trailer than the last bit of footage.

There was some fear that Dimension had yanked Piranha 3DD from their theatrical release schedule entirely, but it seems to have worked its way back into their good graces. The first film was in my top ten of 2010, and I'll be there with bells on for this sequel, in spite of John Gulager's somewhat spotty directorial record.

Enough of me, check out the new trailer for Piranha 3DD!