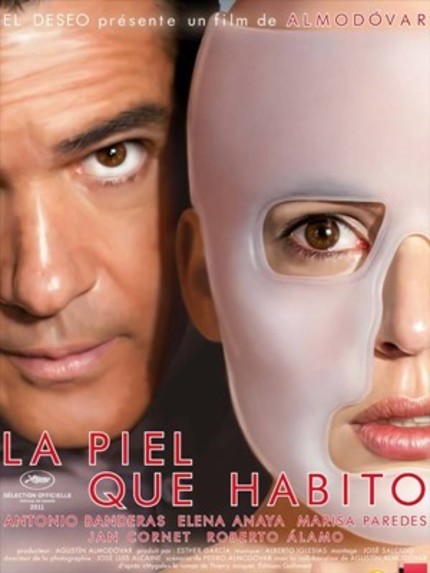 Pedro Almodóvar's latest, The Skin I Live In (La piel que habito) is not for the squeamish.  Adapted from Thierry Jonquet's novel, Tarantula, Almodóvar steps delicately back and forth between tones of medical melodrama and twisted thriller - the cumulative effect ultimately laying somewhere between the chill of Cronenberg's Dead Ringers and the absurd mayhem of de la Iglesia's The Last Circus (Balada triste de trompeta).  Elements of soap opera and indeed a touch of camp do little to lessen the discomfort of increasingly disturbing revelations - and if there is anything at which The Skin I Live In excels, it is its meticulously ordered construction.

Given the tone of the film, Antonio Banderas, starring for Almodóvar for the first time since 1990's Átame (Tie Me Up! Tie Me Down!), is note-perfect as Dr. Robert Ledgard - a gifted plastic surgeon with a great deal of tragedy in his personal history and a dubious grasp of the ethics of his profession.  Throw in the excellent Marisa Paredes as his rather amoral household manager, Marilia, and a complex and beautiful performance from Elena Anaya as one of the doctor's more ruinous cases, Vera, and you have a mess made in heaven, especially as Dr. Ledgard has repaired Vera's face to resemble his deceased wife.  Desire, familial loyalties, and madness vie for accommodation in the doctor's sprawling estate and private clinic.

At the opening night of the 2011 Vancouver International Film Festival, The Skin I Live In had more than a few people feeling queasy and/or faint, due likely in equal measure to the film's uncomfortable ideas and its bloodier moments.  José Luis Alcane's cinematography is appropriately surgical, never shying away from direct examination of location and actors alike.  Deliberately avoiding the simplicity of torture-porn horror, Almodóvar finds a vast array of reasons to torment his characters, and The Skin I Live In has no shortage of means - be they physical, mental, or emotional - to do so.  This is a delightfully creepy addition to Almodóvar's oeuvre.

The Skin I Live In