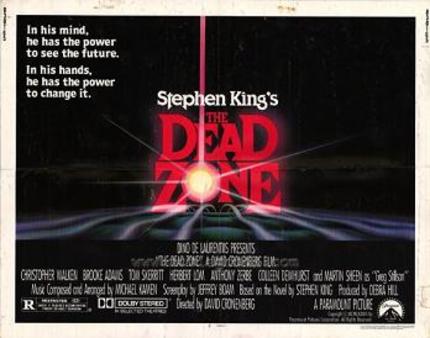 (Better late than never - let's begin the rest of my reviews from Manchester's Grimm Up North 2011, starting with their retro screening of David Cronenberg's Steven King adaptation The Dead Zone.)

It's not surprising fans of David Cronenberg gloss over the director's 1982 curiosity The Dead Zone; it's not much like the man's more famous work. Like an episode of TV blown up to feature length there's precious little subtext here, just sledgehammer morals and easy melodramatic tropes. There's no body horror, no real examination of the human psyche, of perception or horror beyond boo scares and senseless tragedy. It's a Steven King story through and through - like him or not the famous author has leant on a number of very obvious crutches over the years, and The Dead Zone relies on a good many. Yet while Cronenberg has no opportunity to indulge his signature moves, the director proves he can do almost as well at straight-ahead entertainment as he can mood or think-pieces. A young Christopher Walken helps immeasurably (that star charisma's already in full force) but The Dead Zone is a solid little morality play regardless, one that holds up better than some of Cronenberg's more recent work.

A young man teaching science at a small-town high school, Walken's Johnny Smith seems to have it made; he's got a wonderful life, loves his job, plans for a future with his sweetheart Sarah (Brooke Adams) - and then tragedy strikes. Driving home on a foggy night he's run off the road by a truck driver and hospitalised. On coming out of the coma that follows, Johnny finds five years have gone past since the accident. He's lost his job, his parents have grown old before their time waiting for him to wake up, and Sarah's married and had her first child. Yet there's another, still darker side to the time Johnny spent unconscious. When he holds hands with anyone, he sees visions - little vignettes flashing back or forwards in time that turn up key moments in that person's life; things they did, will do or that are happening there and then. And despite mister Smith's best efforts to stay out of the limelight, his new power keeps bringing him unwanted attention.

The cliches are all present and correct, from the utopian vision of small-town Americana (with darkness under the skin, natch) to the idealised trophy girlfriend and even minor tropes like Johnny's Bible-thumping parents, thrown in for seemingly no other reason than King liked to trot out muscular Christianity even at this stage of his career, long before the Dark Tower saga and its spinoffs. Michael Kamen's score is intent on letting the audience know exactly what they're supposed to be feeling, and writer Jeffrey Boam was obviously still finding his feet - he went on to work on eighties matinee classics like Innerspace, Lethal Weapon 2 and Indiana Jones and the Last Crusade, but there's little here to suggest he had the gift of the gab in him. Every other line is either painfully obvious exposition or someone literally stating their feelings, usually framed with the kind of earnest, portentous setup of a particularly straight-faced Twilight Zone episode.

Again, Walken helps. The veteran star's talent and sheer, relentlessly compelling presence is obvious even this early in his career - it's hard to judge in retrospect given it's, you know, Christopher Walken, but he clearly displays that same intensity and seemingly effortless confidence even with a script that could easily have ended up as flat TV filler material. The supporting cast are also largely solid, and far more consistent than the parade of misfits drafted in for the various attempts to adapt King's work over the years that followed. Tom Skerrit does his soft-voiced father figure act as the town's sheriff, and Martin Sheen experiments with what could be an early, rather more unhinged version of his President Bartlett (from TV's The West Wing) as the scheming hick politician Greg Stilson who forces Johnny to concede he has no choice but to make sure the terrible things he sees don't come to pass.

The main problem with Cronenberg's direction is it lacks any proper flair. The effects work doesn't date too badly for a thirty-year-old production, and the World War II flashback shows Cronenberg had a little more money to play with than most TV directors. But while technically everything holds up relatively well the horror, such as it is, remains fairly muted and there's no bravura moment like Scanners or any of his other early landmark films. The script jumps awkwardly through several key plot points and glosses over others almost entirely, and while ultimately the story changes the future of the whole world, the climax is resolutely low-key. There's with no real attempt to make a very small, intimate location reflect the potential impact of the events we're witness to: things are simply wrapped up in an almost cursory fashion that reinforces the idea this is a one-shot cable special given a chance to play on the big screen.

Nonetheless, for all its overt preaching The Dead Zone holds up far better than the awkward pop-philosophy and cartoon moralising in more recent, canon Cronenberg productions like ExistenZ or A History of Violence. It wears its heart on its sleeve, at least, never pretending to any more lofty examination of the human psyche or sophisticated scare tactics. Anyone who dismisses King's body of work out of hand won't get much of this, and not without good reason - it's a simplistic, bullish piece of cinema that's pretty easily waved aside, the kind of popcorn ghost story you've more than likely seen countless times already. But it's a solid, entertaining film as matinee horror goes, where Walken's starring role and some appealing supporting turns make this worth specifically tracking down, rather than just something to leave on if you're channel-surfing. Unfairly neglected, The Dead Zone deserves another chance from more than just Cronenberg fans, and definitely comes recommended.

(The Dead Zone was screened as part of Manchester's horror film festival Grimm Up North 2011, which ran from 6th-9th October at the AMC cinema, Manchester, UK.)