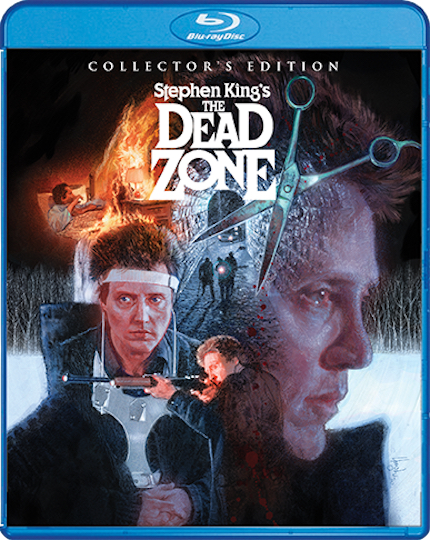 The Dead Zone. I've seen this 1983 film several times, and with each viewing, I love the film more. Scream Factory's recently released collector's edition of The Dead Zone is the definitive home "video" version (at least so far).

Directed by David Cronenberg from the Stephen King book of the same name, this film was produced by hero Debra Hill (Halloween, The Fisher King, Clue). The film stars Christopher Walken as teacher Johnny Smith who's engaged to fellow teacher Sarah (Brooke Adams, Invasion of the Body Snatchers, Moonlighting, Kojak).

Their happiness is shortlived. Straightaway, Johnny forgoes a night at Sarah's and drives home in the rain, where his car collides with an enormous truck. When he awakes, he discovers he's been in a coma for five full years --- and he's got the ability to see both disastrous futures (mainly) and violence in the past.

The first disaster Johnny helps circumnavigate are a house fire that ravages his nurse's home and threatens to kill her child. Then there's a look into the past at his doctor's separation from his mother in WWII. Then there's the sicko rapist-serial killer he helps catch at the perpetrator's home in some truly disturbing moments.

But The Dead Zone is most well-known for is the third act, in which Johnny sees the future of American president and soon-to-be mass murderer, Greg Stillson (Martin Sheen). Some artists and writers are essentially prophets pulling from the ether, and that includes King, who foretold that the United States would eventually be led by a very dangerous man with God-like delusions where his "destiny" is concerned, in addition to other cognitive dissonances.

In short, King foretold Trump. At the risk of spoiling a nearly 40-year-old film, The Dead Zone does not end well for Johnny, but it does for the world. Johnny's physical and emotional pain grows in concert as his tenuous grasp of being human devolves. He's become a prophet of his own kind and withdraws from society as the press tries to make a circus out of his experiences. However, his internal sense of justice will not allow him to escape being a hero or devil, depending on who interacts or collides with him. One of the most satisfying, cathartic aspects of The Dead Zone is that people get what they deserve.

The genius in this adaptation is multifold with Cronenberg at the helm, assisted by Hill and bankrolled by Dino DeLaurentiis. He set the melancholy tone early, with Michael Kamen's perceptive score and use of lighting and color. He also infused a real humanity and warmth into the film, and as a result, Walken shines in what is probably the warmest role of his career. Cronenberg, too, is far warmer than his usual clinical gaze, no doubt informed by King's text and the brilliant adaptation by Jeffrey Boam (The Lost Boys, Indiana Jones and the Last Crusade).

In fact, everyone shines here, most noticeably, the impecable cast. Supporting characters are played by Tom Skerritt, Herbert Lom, Anthony Zerbe, Martin Sheen, and more. From cast to crew, it's one of the most perfect films that come to mind.

The picture is gorgeous, this is a fantastic 4K restoration with just some minor grain, mostly in scenes with gray winter skies, but hey, that's film. Audio is basically perfect.

As for featurettes on this disc, some are new, some are legacy from an old release. All special features are good, but I especially enjoyed listening to Cronenberg speak about the filmic techniques he used to bring The Dead Zone to life; hearing him talk about the film was a mini-film school, and I wish he'd done a commentary.

This Scream Factory Blu-ray is essential and comes with my highest recommendation for fans of King, Cronenberg, Hill, Walken, or for lovers of great thrillers. Add The Dead Zone to your home Blu-ray library by heading to Scream Factory's page for the film here.