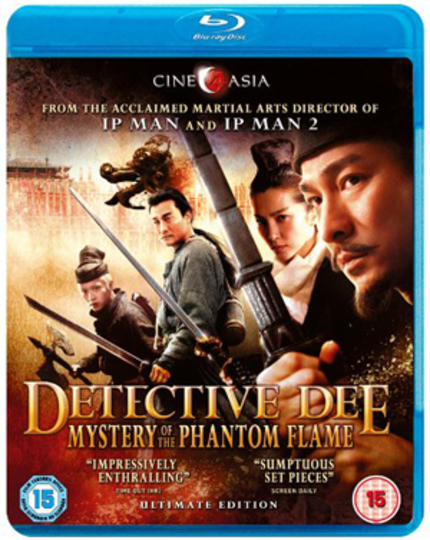 [US readers are reminded that Detective Dee is in limited theatrical release in the US RIGHT NOW and this is a film that greatly benefits from being seen in as large a format as possible. Watch Andy Lau punch a deer in the face on the big screen! Find the complete list of theaters screening the film here.]

Much has been made about Detective Dee being Tsui Hark's return to form after a largely shaky 15 year run of mediocrity.  I must say, he delivers the goods here in a way I was not expecting.  Hark used to be the king of Hong Kong action, with films like The Blade and Peking Opera Blues in his satchel, it used to be that a film with his name on it came with a degree of certitude that you'd be entertained.  Somewhere along the line, he lost that benefit of the doubt, but teamed up with Andy Lau on screen and Sammo Hung behind the scenes, he's turned in a winner, and Cine Asia have given the film its due on Blu-ray.

When a series of mysterious murders prevents the inauguration of China's first Empress, Detective Dee, the greatest investigative mind and Kung Fu Master of his generation, is brought back from exile to embark on a manhunt that will forever change the course of history!

With a matchless performance from leading-man Andy Lau (Warlords and House of the Flying Daggers) and breathtaking action from the martial arts director of Ip Man and Ip Man 2, Detective Dee is non-stop, heart-racing entertainment in the highest traditions of Asian Action Cinema.

Detective Dee is all about scale.  Everything about the film is big, nay, HUGE. The sets, the effects, the stars, the scale, all HUGE.  Fortunately, in this case, it translates into big entertainment for everyone! Andy Lau plays a very "Andy Lau"-like character, stoic and confident, and while he may not be a martial artist by trade, his recent work in this and Shaolin prove that he's quite adept at making himself look good on camera.  I suppose having Sammo Hung around can't really hurt much. Lau is only the brightest star in a constellation of a cast that also includes Tony Leung Ka Fai, Carina Lau, Li Bingbing, and Chao Deng, all of whom give solid performances in this film.

As I mentioned above, Hark sets the bar pretty high for spectacle from the opening frames of the film, where we are stared down by an immense statue of the Buddha under construction in preparation for the coronation of an empress.  The film uses these huge distraction to stage a couple of murders and a ton of intrigue.  The way that Hark uses small moments in big places is really ingenious and works to the film's great advantage.  Plus, Andy Lau kung-fu fights a half dozen deer, and who hasn't wanted to punch the shit out of a deer, just to show it who's boss?

Rather than using the enormity of the scale as a crutch, Hark manages to find the human stories within the characters.  This is very important, especially since much of the film is CGI, and not exactly the best Hollywood has to offer.  Unfortunately, we've become spoiled to photorealistic CG in recent years, and Dee's sticks out like a sore thumb when it should blend, sometimes. That is really my only major quibble with the film.  Even at two hours, I was never bored, and never wondered how much longer until the film ended.  A whole goddamned lot happens, but it is never confusing, and when the film ends, it doesn't drag out any unnecessary epilogues, it just ends. Plain and simple.  I applaud them for that, alone.  Detective Dee is definitely worth giving Tsui Hark the benefit of the doubt, and for the first time in years, I can honestly say I'm excited to see what he does next!

Detective Dee was shot on the RED ONE camera, and therefore the image on this Blu-ray is straight from digital with no film intermediate.  As such, the image is spotless and perfect, perhaps a bit too much so at times, only when it makes clear the limitations of the CG. While digital shooting makes films easier to post-produce these days, it also does often sap a little bit of the life from the image.  Of course, none of this is the fault of Cine Asia, who've released a cracker of a Blu-ray. The image is tack sharp and detailed in ever frame, it would've been hard to screw this up, and thankfully, they didn't, the video is perfect.  The audio is similarly perfect, with several action sequences dotting the film, my home theater got a bit of a workout.

The extras are mostly ported over from the HK Blu-ray, and very EPK-like.  There is a gallery of about a dozen interviews of various cast and crew that are mostly mutual back-patting, and there is some behind the scenes footage.  This stuff is all pretty standard.  The exclusive bit is the Bey Logan/Mike Reeder commentary, which is, as usual, very informative and at times nearly as interesting to listen to as the film is to watch.  I love when Cine Asia presents exclusive material because it is almost always of very high quality, and totally worthwhile, even when not totally directly related to the film.  They should do more of that, they have a knack for it.

Overall, Detective Dee is a fun film with lots of rousing action and a solid performance from Andy Lau.  Cine Asia's Blu-ray is a perfect presentation of the film and a worthy addition to any HK film fan's collection, anywhere in the world.