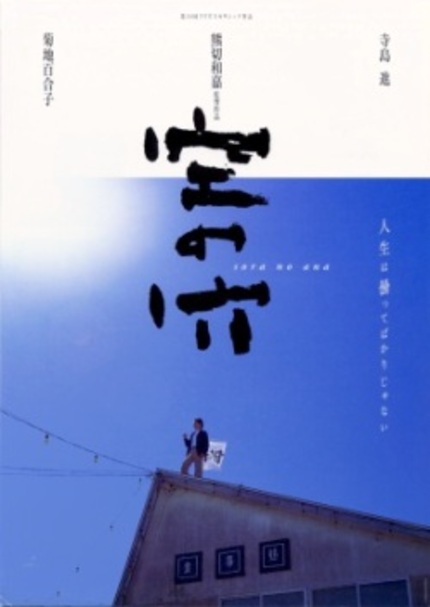 The first few years of the new millennium formed the high days for modern Japanese dramas. Kumakiri's Hole In The Sky is one of the forgotten and often overlooked gems of that era. To be fair though, this doesn't surprise me one bit. While I don't doubt the film's excellence, it is definitely not the most accessible film to get acquainted with. Fans should take notice though, as Kumakiri and Terajima collide for a genuine tour de force.

Hole In The Sky stems from a time when Japanese drama directors felt they didn't need much in the way of script or plot advancement to make a good film. Characters are usually rather non-communicative, difficult to read and appear to be cold and helpless. And while Hole In The Sky does feature a clear start and ending, nothing is actually resolved during the running time of the film.

All of the above elements can be seen as flaws or shortcomings, but fans of the genre will recognize these as the main attraction. No sentimental nonsense, no meaningless events and/or dialogues just to make the viewer feel at ease and no real life lessons learned when the credits start rolling. Kumakiri ("Green Mind, Metal Bats", Antenna, Furijia) has never been one to make many concessions to please his audience and Hole In The Sky is no exception.

Susumu Terajima takes up the lead role of bored country bumpkin working in the run-down diner of his father. His path crosses that of a young girl left behind by her no-good boyfriend, and when his father leaves for some cross-country gambling that very same day the two of them decide to spend some time together. Even though they grow quite fond of each other, they both realize that a lasting relationship is not really in the cards, but saying goodbye isn't as easy as they expected.

On a visual level Hole In The Sky leaves a little to be desired. While the film definitely features some nice shots and impressive shot compositions, the lighting and use of color is somewhat lacking, making even these nice compositions somewhat drab and unattractive. I think it's quite clear that Kumakiri wasn't really occupied with the visual side of things, but with a little more effort the film could've looked a whole lot better as the potential was certainly there.

The soundtrack is a decent affair, providing a gentle, light-hearted atmosphere with the right amount of dramatic undertones. It remains in the background for most of the film, never intruding or never asking any direct attention from the audience, but giving off just the right amount of tension to be effective. Genre fans will know what to expect, just don't hope to be dazzled by anything out of the ordinary or extravagant.

Greatest selling point (at least for me) is Susumu Terajima picking up the role of the main lead. I've always found Terajima to be underused in secondary roles (something he would only confirm one year later in Sabu's Blessing Bell), with Hole In The Sky he proves that his understated style of acting and overall presence is more than enough to carry a stilted, slow-paced drama like this one. Fans might also recognize actress Rinko Kikuchi (Babel) in one of her early roles, right opposite of Terajima. She provides a nice challenge for Terajima, effectively heightening the dramatic tension between both characters. A secondary cast is mainly absent but whatever small roles are needed are filled in with the proper professionalism.

Hole In The Sky is a rather tough film to appreciate. The main characters aren't the most communicative, nor are they very pleasant to be around. This leads to some rather questionable actions and a rather unusual relationship that develops itself throughout the film. At the same time, it's there where the main strength of Kumakiri's film lies. Catching a glimpse of the crackling collision of both characters' paths of life is all the dramatic depth a film like this needs, all the rest is simply cut out.

While at heart Hole In The Sky is a rather depressing film, it wouldn't be a Japanese drama without putting the film's events in proper perspective. No matter how many mental dents these characters carry with them, at the end of the film they reside in a state of equanimity. They've dealt with their past problems and they are ready to tackle the future head on. Getting that across without the usual cheese and sentimental bullshit is what makes these type films so appealing.

Hole In The Sky is slow-paced cinema. There isn't much happening in terms of dramatic events, the characters are rigid and introvert and odd behavior is often taken for granted. This film is a perfect example of good, solid Japanese drama fare, but should be handled with a little caution by people who don't really know what to expect. It's a rather long film and if it doesn't strike the right cords it will definitely become a tedious and boring affair. Not for me though, I liked every minute of it.
Sign-In to Vote
Tweet 0 Submit

The limitations of spelling correction right there, thanks for noticing!

It is the little things that diminish credibility the most.

I read a nice review after catching the mistake on the home page. I did enjoy the review and based on it, I probably won't be seeing this film. Nevertheless, it is always a good thing to read about Japanese dramas.