Exploring The Twilight Zone, Episode #73: "It's a Good Life"

In one of the most memorable episodes of the entire original series, a young boy learns that with great power comes great, evil mischief.

The Plot: "A monster had arrived in the village ... just by using his mind." Little Anthony Freemont (Billy Mumy) is both god and devil, a young boy with incredible mental powers who can simply wish away anything, or anyone, he doesn't like.

With all modern technology, and, indeed, the rest of the world, wished out of existence by Anthony, the few remaining inhabitants live in terror, including his parents (John Larch and Cloris Leachman). Because Anthony can read minds, everyone must think good thoughts. They must keep a smile plastered onto their face, and agree with everything he does, and proclaim it "good." Or else they might end up buried in the cornfield.

The Goods: Rod Serling's teleplay, based on a terrific short story by Jerome Bixby, boldly introduces the episode with Serling's on-camera presence. As the introductions in previous episodes of Season 3 demonstrated, Serling was either becoming more comfortable on camera or wanted more variety and movement. (The credits, which had formerly come at the end of the episode, were also moved up to the first post-teaser scene.) It was the longest opening narration of the series. 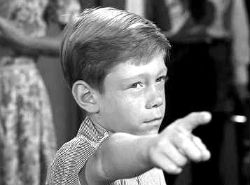 This must be every parent's nightmare: Your kid is acting up, and you can't do a thing to stop it. Larch and Leachman are exquisitely tortured; not only do they have to live with the knowledge that this monster sprang from their loins, they have to actually live with the kid, and maintain a false facade of happiness and contentment pretty much 24 hours a day.

Even if you don't have children, surely you've experienced the bad, rude, or downright nasty behavior of someone else's kid, which makes this an episode that everyone can relate to in a very visceral manner.

The Trivia: Serling wrote a screenplay for a feature film version in 1974, but it was never produced. Joe Dante remade the episode, based on a script by TZ vet Richard Matheson, with wit, imagination, and a great use of color in Twilight Zone: The Movie.

Mumy and Leachman showed up playing the same characters in a sequel episode for the revived series in 2002, with Mumy's daughter playing his character's young, "gifted" child.

Mumy had already been featured in the TZ episode "Long Distance Call" (little boy calls his dead grandmother) and would appear again in Season 5 before his stardom in "Lost in Space." In addition to acting in the sequel episode, Mumy also provided the story for another episode of the revived series.

On the Next Episode: "A former German SS captain returns to Dachau concentration camp and begins reminiscing on the power he enjoyed there, until he finds himself on trial by those who died at his hands."