Exploring The Twilight Zone, Episode #141: "Spur of the Moment"

Out riding her beautiful white horse one day, a young woman is startled to see a somewhat older woman who looks strangely familiar ...

The Plot: Young and beautiful Anne (Diana Hyland), dressed in white, mounts her beautiful white horse for a morning ride in the countryside. She is startled to see a somewhat older woman dressed in black atop a beautiful black horse. The woman in black screams at her as she rides toward Anne, frightening Anne and prompting her to kick her horse into high gear, outrunning the dark rider.

Anne returns home to her lovely mansion. Anne is, naturally, quite upset, and her loving parents (Philip Ober and Marsha Hunt) tend to her kindly, as does her slightly older fiancee, Robert Blake (Robert Hogan). While all this is going on, a young man named David Mitchell (Roger Davis) forces his way into the house. It turns out that he's in love with Anne and wants to marry her, believing that Anne rejected him and agreed to marry Robert only to please her domineering father. 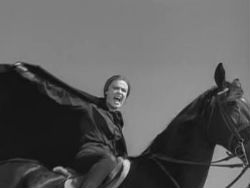 Anne's father is quite forceful himself, brandishing a handgun in an effort to make David leave, but David is persistent, and from Anne's tearful reaction to David's presence, it's clear that she is not entirely certain that she's doing the right thing by marrying a man she doesn't love. Later that night, she's presented with an opportunity to make a fateful decision that will change her life forever.

The Goods: If you haven't seen the episode, I hope I avoided spoiling the twists for you, but, frankly, this is an episode that doesn't rank very high, even in the general doldrums of Season 5.

Written by Richard Matheson, it's well-made, and the dialogue is fine, but Anne is not sufficiently sketched-out to engender sympathy for her situation. Neither David nor Robert make very good cases as attractive suitors for Anne, but neither does she appear to be more than a spoiled rich girl.

And the twists that I avoided spoiling? Well, they left me distinctly underwhelmed. That's the problem with an "average" episode in The Twilight Zone: the bar had been set so high, and so often, in Seasons 1-3, that the disappointments are more acute.

The Trivia: In Marc Scott Zicree's book THE TWILIGHT ZONE COMPANION, Matheson says that he liked the time travel stories of British author J.B. Priestley, "that type of story where you play around with time and show, with things you meant to do, how badly they worked out."

But as to the finished product, he "didn't like the way it was done, particularly." Matheson felt that the way Elliot Silverstein directed the script, with inopportune close-ups in the opening moments, gave away too much that was intended to be reserved for a final reveal.

On the Next Episode: As he is about to be hanged, a Civil War veteran manages to escape, but is unable to shake off "mysterious neck pains." Hey, we've all been there, am I right?