Exploring The Twilight Zone, Episode #143: "Queen of the Nile"

What is the secret of youth? And does it have anything to do with walking like an Egyptian?

Jordan asks Pamela her age, and she says she is 38. He wonders how it could be that she appeared in a movie in 1925; she denies that it was her, and maintains that her big break came in 1940 with "Queen of the Nile," when she was 15. Pamela's mother, Viola (Celia Lovsky), enters. She's disturbed ... by something. Pamela dismisses her.

Jordan is utterly charmed by Pamela, and even makes plans for a date. As he's about to leave, Viola rushes out to talk with him, and tells him a long-held secret that sounds fantastic, but makes him change his plans. He digs further into Pamela's past, with the help of his editor in Chicago, and then decided to confront Pamela with what he has found. 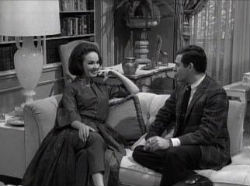 The Goods: The obvious antecedent is the Season 1 TZ episode "Long Live Walter Jameson," with Kevin McCarthy as a history professor with first-hand knowledge of his subject. So "Queen of the Nile" can't help but feel like a rehash.

The dialogue is smartly written -- which I appreciated even more on a second viewing -- and the story has a couple of nice twists.

But the performances are not particularly compelling, not much is said about Pamela's motivations, and the episode as a whole feels strictly routine.

The Trivia: This was the final writing credit for Charles Beaumont, though it was his friend Jerry Sohl who conceived of the idea. "I had a scarab ring many years ago," Sohl told THE TWILIGHT ZONE COMPANION author Marc Scott Zicree, "and knew that the scarab ring was the symbol of fertility and immortality in Egyptian times. ... After about half an hour we had the story worked out. I just went home and did it, sent it in, and they shot it the way I wrote it."

Beaumont was ailing from an illness that was, most likely, Alzheimer's Disease, and had lost the ability to concentrate sufficiently to complete any work. His friends pitched in to help out Beaumont and his family, with Beaumont receiving sole screen credit, though the fees were split. Beaumont died three years later, at the age of 38.

On the Next Episode: "Philanderer Joe Britt sees his indiscretions shown on his own TV set after it was worked on by a very unique repairman."