Exploring The Twilight Zone, Episode #144: "What's in the Box"

Despite the title, Brad Pitt does not appear in this episode. Instead, "the box" refers to a TV that unexpectedly adds a new broadcast channel.

The Plot: Taxi driver Joe Britt (William Demarest) is a grouchy sort of man, barking at his long-suffering wife Phyllis (Joan Blondell) over dinner; she responds in kind.

He retreats to the living room, where a repairman (Sterling Holloway) is laboring to fix the television, and proceeds to express his suspicions, in general, about repairmen. With a twinkle in his eye, the repairman declares that the set is fixed, and leaves, but not before twinkling his eye again.

Rod Serling then provides his introduction, sneaking in a brief impression of venerable TV variety show host Ed Sullivan, and twinkling his eyes too! The stage is set for a merry episode of comic rejoinders.

The Goods: The episode does not, however, play out as a light comedy. Someone -- presumably director Richard L. Bare -- forgot to tell Demarest and Blondell that the episode was intended to be humorous, because they go after each other like hungry tigers, snarling and snapping almost without let-up. 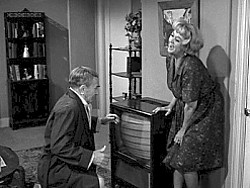 Their domestic quarrel is predicated on Phyllis' suspicion that Joe is stepping out on her with some loose woman in Yonkers. On the face of it, this is ridiculous; Demarest was a terrific character actor, but he would not be your first choice for a lothario who drove a taxi. Nonetheless, the heart wants what the heart wants, and all that jazz, and Phyllis is in a fury about her suspicions.

Meanwhile, the TV is tuning in a new station, Channel 10, which it never received before, and Joe is startled to see his secret affair broadcast over the air. He's even more shocked when he sees the argument he just had with Phyllis broadcast right after that.

Of course, Phyllis can't see any of the action -- all she hears and sees is static, which only adds to the poisonous atmosphere of their home. Joe, however, is chastened by what he's seen, and starts to reconsider his actions, which doesn't end up in the result he might wish.

The episode ends on what is clearly intended to be a light note, but the marital arguments strike too close to the bone to be dismissed, and the entire episode has a foul stench, something that I can't remember feeling about any other episode of the original series.

The Trivia: Writer Martin Goldsmith blames the actors for how the episode turned out. "It lacked all subtlety the way it was done," he told Marc Scott Zicree for his book THE TWILIGHT ZONE COMPANION. "I think Joan Blondell and William Demarest overplayed it. It was just too broad." Goldsmith wrote one other TZ episode, "The Encounter," which aired a little later in Season 5.

This was the last of seven TZ episodes directed by Bare; his other credits included the much more memorable "To Serve Man."

On the Next Episode: "Wealthy Jason Foster is dying and he invites his greedy heirs to a Mardi Gras party where they must wear the masks he specially had made for them or else be cut off from their inheritance."