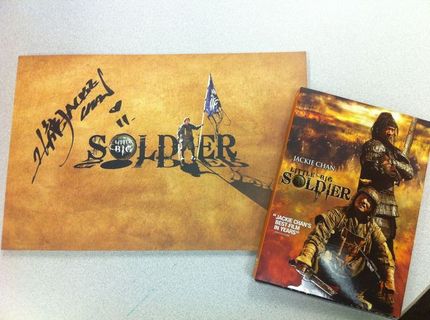 [To clear some reasonable confusion, I am rephrasing the question, though answers submitted prior to this correction will be considered. The answer is the same.]

Since you're on our site right now, you might have noticed that Well Go USA are releasing Jackie Chan's Little Big Soldier on Blu-ray/DVD Combo and DVD today.  The cover of the DVD has a quote from us calling this film Jackie's best in years.  Believe the hype!  Little Big Soldier is a ton of fun with plenty of Jackie Chan's signature stunts/acrobatics.  While Chan may be getting a bit older and perhaps a wee bit less reckless, his combination of action and comedy is no less potent as he has been slowly morphing into a martial arts version of Buster Keaton, and that is high praise coming from me!

In celebration of the release, the great folks at Well Go USA have put together another fantastic contest exclusively for ScreenAnarchy readers. They've managed to score a Little Big Soldier promotional photo book signed by the biggest film star in Asia, Jackie Chan! This may be even cooler than the last awesome contest we hosted for Legend of the Fist, and that one was a doozy!

The last contest we had was a trivia contest and we got a great response, but I think we can do even better this time around!  Remember, the more of you guys that respond to the contest, the better the chance of more and better contests in the future!  Here's the very easy question:

What Jackie Chan film is releasing day and date in China and in the United States through Well Go USA?

We've posted this information in the past and if you do a quick search you can probably find it right here on ScreenAnarchy!  Send your answers to contest@wellgousa.com and cross your fingers!  I want lots of entries, come on guys, make me proud!  This contest ends on the evening of Sunday, August 28th, so get your entries in quickly!

WANT!
But I'm not allowed to enter...