The Asian Film Festival Of Dallas Celebrates 10 Years In Style. 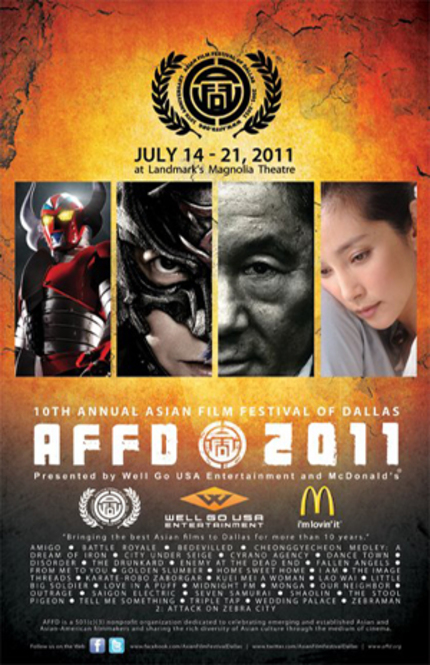 The Asian Film Festival of Dallas really is the premiere Asian film event in the southwest.  There isn't another festival as focused on emerging Asian film in Texas, or even in the surrounding states, and every year around this time, I feel fortunate to live in Dallas, despite the blistering heat.

This year AFFD is bringing a lot of great big name Asian action to the screen. From China, we've got screenings of Jackie Chan's period action film, Little Big Soldier.  From Hong Kong is Benny Chan's retelling of the ancient story of Shaolin and his mutant circus freaks in HK story, City Under Siege, Derek Yee's (One Night in Mongkok AFFD 2006) Triple Tap, as well as Dante Lam's (The Beast Stalker AFFD 2009) crime drama, The Stool Pigeon.

AFFD would not be the same without some awesome Japanese films, and this year is no exception.  This year marks the return of Takashi Miike, missing from AFFD since 2006's The Great Yokai War, with his superhero sequel Zebraman 2: Attack on Zebra City.  AFFD hosted a special screening of the original in 2008 (I believe), and it is one of my favorite Miike's. Takeshi Kitano marks his return to the yakuza film after years in the wilderness with Outrage, also screening this year. One of the most exciting films this year is Noboru Iguchi's Karate-Robo Zaborgar, which is getting great reviews from festivals all over the world.

For their tenth anniversary, AFFD are hosting several special sections celebrating both their own history, and Asian film culture.  The first is AFFD: Year One, which is a collection of films from the very first AFFD, from that section we get screenings of one of the greatest films ever made, Akira Kurosawa's The Seven Samurai, Kinji Fukasaku's masterpiece, Battle Royale, Wong Kar-Wai's Fallen Angels, and classic Korean horror Tell Me Something. Another special section is Taiwan: Then and Now, which goes back over forty years in Taiwan's cinematic history and brings us Our Neighbor (1963), Home Sweet Home (1970), Kuei-Mei, A Woman (1986), and Monga (2010).

But that's not all!  There are lots of other films that I'm dying to see.  The Owl & the Sparrow director Stephan Gauger returns to AFFD with Saigon Electric, a B-Boy drama.  The premise sounds interesting, and after his first film, I'm willing to take the plunge.  Also returning to AFFD is Pang Ho-Cheung (Isabella AFFD 2007) with his film Love in a Puff, which has gotten great reviews.  We've also got Korean revenge thriller Bedevilled, Japanese drama From Me to You, and a thriller, Golden Slumber, from the director of Fish Story and so many more I can't write them all up!

Check out the schedule below and buy your tickets soon, I'm sure many of these screenings will sell out quickly.  I'll see you there!

The Asian Film Festival of Dallas is scheduled for Friday July 15th through Thursday, July 21st at the Landmark Magnolia Theater in uptown Dallas.  Tickets are available through the AFFD's website in advance or in the Magnolia box office on the day of the show.

Visit AFFD's homepage, where you can get more information about the films, buying tickets and passes, and connect to their social network through Twitter and Facebook.