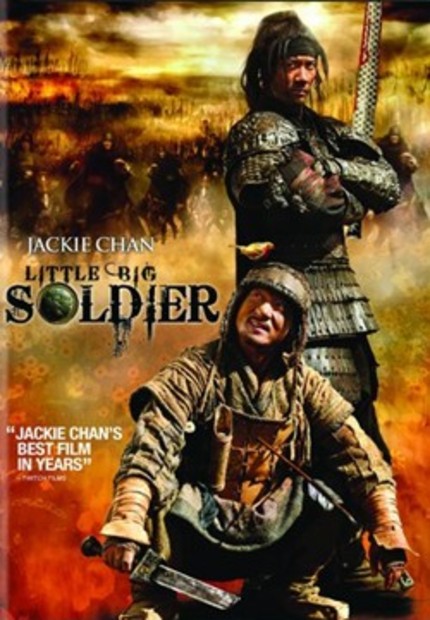 Quite comfortably the best film of Jackie Chan's recent career Little Big Soldier hits US DVD and BluRay tomorrow from WellGo and, true to form, the company has released a trailer that captures all the best of the picture.

Little Big Soldier is the story of a soldier (Jackie Chan) and a general (Wang Leehom) who come from opposing states and also have very much opposing views on the war and the world. Jackie Chan in one of his finest performances plays a soldier from Liang, who ultimately survives the war by playing dead. Lee Hom Wang plays a general from Wei, who is wounded fighting for his country. A painful yet comical journey commences when the soldier decides to kidnap the general and bring him back to his state in the high hopes of collecting a reward. When the unlikely duo is confronted by danger, they quickly learn that they must join forces in order to survive!

Epic landscapes, large scale battle and lots of vintage Chan physical humor drive the trailer along and demonstrate that when Chan puts his heart into it and allies himself with a quality director he's still one of the absolute best in the world. Check out the trailer below!
Sign-In to Vote
Tweet 0 Submit

Todd, what's going on here? lol I can ignore the banner, the background and all the ads except the one that pops up and doesn't let me interact with the page here until I dismiss it. You deserve to make money for the site, but this seems to touchdown somewhere between "an appearance of impropriety" and the kind of ad garnishing illegal DL sites engage in.

I love this movie. This has all those elements normally found in Jacky Chan's movie, and it has a heart too. Jacky the 'wiseguy' now become the wise guy. Starting with Shinjuku Incident, except "The Spy Next Door", he's really heading to different kind of character and I like it. Not another Expendables or even Rambo, Sly. Can't wait to see 1911.