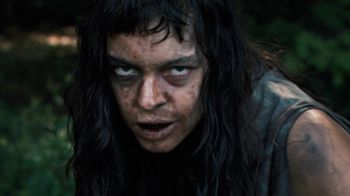 Here's the brand new trailer for Lucky McKee's THE WOMAN, which many of you would no doubt want to check out. But be warned: THE WOMAN is controversial and challenging; harrowing and horrific; disturbing and disgusting; and according to at least one audience member at this year's Sundance, a film that should be burned and never shown again.

Synopsis: Chris Cleek (Sean Bridgers, Deadwood) is a small town court officer living a quiet, seemingly normal life in the heart of Maine with his beloved family. That is, until Chris discovers a feral woman roaming the woods and makes it the family's project to civilise her. But as the family's methods of forcing civility upon the woman become ever more extreme, the perverse bonds uniting them will be cast into violent relief.

In my part of the world, Monster Pictures has acquired rights to THE WOMAN and will be releasing it in its 'pure uncut' form in Australian cinemas (aren't we lucky?). THE WOMAN is also being shown as part of this year's Melbourne International Film Festival that is currently running.