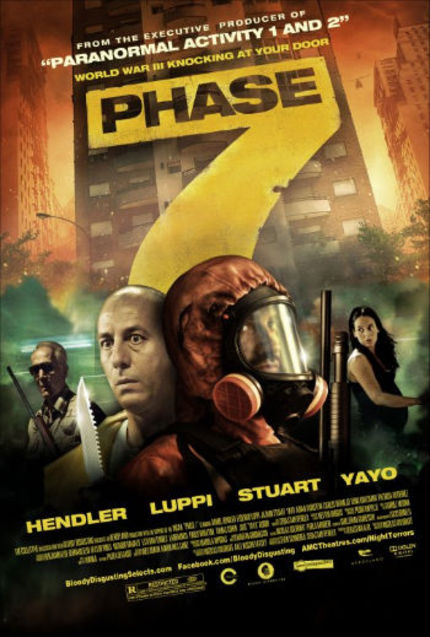 [With Phase 7 opening tonight in limited release in the U.S. -- check Bloody Disgusting Selects for theaters and showtimes -- we revisit our review from SXSW.]

What if the end of the world came and nobody cared? Phase 7, written and directed by Nicolas Goldbart, borrows directly from Shaun of the Dead in an early scene as a married couple checks out of a grocery store in Argentina and drives home, completely oblivious to the stream of people stampeding into the store accompanied by the sound of wailing sirens.

Unlike the characters in Shaun, this couple takes a long time to react. They may not look like slackers in a soon-to-be post-apocalyptic world, but they are.

Coco (Daniel Hendler) and Pipi (Jazmin Stuart) fight with and badger each other in low-energy mode. When they finally notice that an epidemic is spreading across multiple countries and martial law has been declared in Argentina, it seems more of an inconvenience than an emergency to them.

They're never in a hurry to do anything, so when their presence is requested in the lobby of their high-rise apartment building, Coco takes his time shuffling downstairs and then calmly watches along with his neighbors as the building is quarantined, [REC] style.

Coco and Pipi pass the time quietly in their apartment, reading, sleeping and eating. They ignore the warnings repeatedly broadcast on TV: "Do not touch anyone. Do not kiss. Just wave." Many days pass without incident, though they hear strange noises in the night.

What wakens Coco, fitfully, from apathy and propels him into action is one of those noises and a neighbor, Horacio (Yayo Guridi), who decides to help. Coco doesn't think he needs any help, but he could use some "away time" from the henpecking he receives from Pipi, who is 7 months pregnant when the story begins. So he accompanies Horacio and learns that the man believes that the epidemic is a government conspiracy. Thus assured that Horacio is simply paranoid, Coco sees no problem in accompanying him as he carries out certain activities for self-preservation within the building, especially since Horacio is so generous with material goods.

While Horacio is helpful, the older, seemingly benign Zanutto (Federico Luppi) transforms into Christopher Walken in The Deer Hunter, all sunglasses and hunting vests. He presents a new danger to the residents of the building that leads to explosive confrontations.

Coco and Pipi are so lazy, calm and lackadaisical that it could be aggravating. However, and this is a big however, Goldbart establishes early on that he intends for the film to be a parody of high-energy, lunatic zombie movies by quoting Shaun and [REC] so directly. (At least, I think that was his intention; that's how the film plays best.) Guillermo Guareschi's synthesizer-driven, faux-John Carpenter musical score, which is very percussive and minor-key (and terrific and effective), drives the point home.

It's a very dry parody with a relatively modest pay-off, but the restraint shown by Goldbart works to the film's advantage. Goldbart, an editor who's worked with Pablo Trapero (Crane World, Rolling Family) among others, has a keen sense of how to put films together, but Phase 7 never ramps up to anything like a traditional action or horror flick -- it's as much a parody of post-apocalyptic films as anything else -- even as bloodshed and dead bodies begin to pile up.

Instead, it rocks along nicely in a groove at a medium tempo, slyly integrating modest amounts of social commentary along with the low-key laughter.