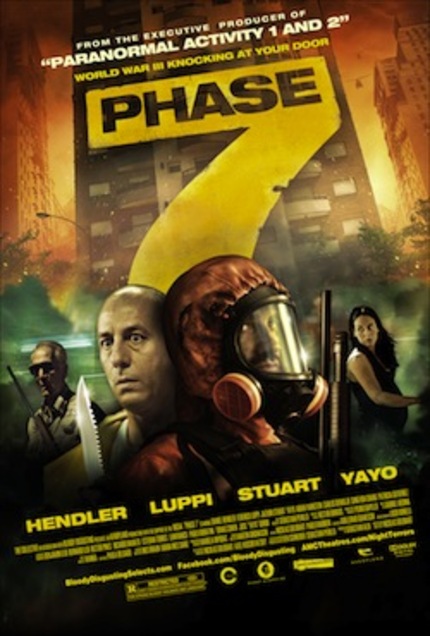 Nicholas Goldbart's pandemic-panic Phase 7 has been making the festival rounds with stops off at SXSW, EIFF, and will soon be making an appearance at Fantasia Fest. Well, that same week Bloody Disgusting and AMC theaters will be bringing it to the AMC Empire 25 in NYC, and we've got 5 passes to give away. The very limited play dates are July 13th, 15th, 20th and 22nd - all late-night shows. If you want a pass good for two to any of those shows, all you have to do is email me under the subject line "Phase 7 Tix" with your name and mailing address by July 9th at 6pm EST. Good Luck!

PHASE 7 mixes satire, humor, horror and social commentary in a way that reminds viewers of the arch SHAUN OF THE DEAD and the savvy claustrophobia of [rec].  In the film, Coco (Hendler) has just moved to a new apartment with his wife Pipi (Stuart), who's seven months pregnant.  At first, they don't seem to notice the growing chaos around them, but when authorities quarantine their building after a deadly pandemic breaks out, Coco joins forces with his off-kilter, but well-prepared and stocked next-door neighbor Horacio to defend his refrigerator and keep Pipi safe.  Meanwhile, outside the building, Buenos Aires--and the world as the apartment denizens know it, is disappearing. The world is ending; got ammo?