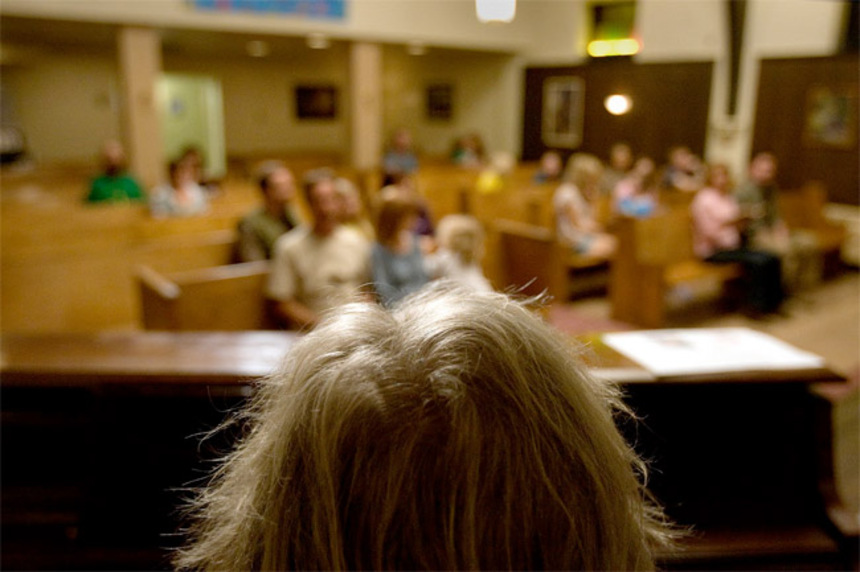 DISCLAIMER:  It is tempting to frame a review of Kevin Smith's new film, RED STATE, around its controversy on the business and social media side of things.  Smiths decision to 'four wall' the film on a roadshow style tour and shutting out the usual publicity channels caused a bit of a tempest in a teapot at Sundance, particularly because seems to have become a lot more prickly in the past decade and has no problem broadcasting this to his fanbase either by his podcasting network or twitter account.  That being said, I do not judge a Mission Impossible film by concerning myself with Tom Cruises thoughts on pharmaceuticals or his antics on Oprah, and I believe that Smiths film deserves a fair shake outside the confines of personality and gossip (and the business of show.)  But it is hard, oh so hard, not to see things through the mist of online micro-controversies.

The 'cult' film is back, kicking off with the one-two punch of House of the Devil and The Last Exorcism along with the forthcoming Wicker Man sequel (Robin Hardy's The Wicker Tree) and Ben Wheatley's Kill List, the genre hasn't seen this kind of surge since the mid to late 1970s.  Sandwiched in the middle of the micro-renaissance is Kevin Smith's radical departure from both the Askewniverse and pungent palette cleanser after his real horror film, Cop Out.  Red State is not so much a cult-film as it is a film about cults, but one that defies expectations at several turns.  Part diatribe against Fred Phelps and the Westboro Baptist Church (who is mentioned - and casually disregarded - explicitly in in the film) part torture-horror, part action-thriller, part bureaucratic farce, there are at least four films clamoring for dominance in Red State.  And while Smith may not quite have panache for tonal shifts that the South Koreans have perfected, there are enough surprises on display here to warrant a recommendation along with a caveat or three.

Starting very much like a Kevin Smith film (albeit with a deliberate sense of hand-held camera work) three horny high school kids looking for sex follow up on an internet site that promises an anything goes experience.  They want to all 'do' a girl at the same time, and in as vulgar language as possible, live the real misogynistic pleasure of teenage boys, the fantasy and anticipation.  Of course the real thing doesn't add up as planned, with an aged Melissa Leo getting herself drunk while working up to the act, which isn't exactly the act as promised.  Enter the whirlwind of Michael Parks who drops a Tarantino-lite monologue/sermon/soliloquy which grinds the first film to a halt and begins something different.  It's no coincidence that Parks was cast in the film, as Tarantino and Smith represented a mid-1990s re-invention of Miramax.   Both are word jockeys, both are film nerds, with each representing different sides of the Sundance style movie.  I won't say that the dialogue is razor sharp, but it is authentic enough to believe that Parks was channeling it on the spot.  Say what you will about the shift in tone with Parks instantly stealing the film with his Phelps-on-'roids scenery chewing, its worth the price of admission right there.  As Pastor Cooper prepares to murder a gay man by suffocation, he has the good grace to send the children out of the church, but that doesn't let the audience forget that they were there in the first place for the rest of vitriol.  On the whole I never got the sense that the film is playing for keeps (as Smith undermines the whole film in the penultimate scene involving ATF bureaucrats), but he manages to get maximum visceral impact from innocent children's faces in several scenes.  It makes the middle of Red State a very icky and unpleasant affair, but kind of daring as well.

Then we head into Coen Brothers territory with the entrance of John Goodman, echoing a legit G-Man version of the Dude's blustery side-kick, Walter Sobchak, dropped into the son of a Gundarrson domesticity of Fargo and exiting on something straight out of Burn After Reading.  Coen regular Stephen Root even shows up as a goofy and useless local sheriff with a few unpleasant skeletons in his closet.  But lest this review get as piecemeal as the transitions in Red State, lets go back to where we were.  Goodman's agent-in-charge mounts a politically inflected siege of the Cooper compound, while strife and confusion in the Cooper family (and their hostages) offer drama on the inside.  To go further is to get into some heavy spoiler territory, and the films surprises in these acts are the films best surprises.  The culmination of the siege could have been a coup d'état, Smith clearly misses his Inception moment, but immediately sets about undermining itself with expositional comedy.  Before you can say Return of the King, the film has several false endings until finding a great image to close both the film and Smith's straightforward thesis (the final shot is indeed note perfect.) Although this scene comes a tad too late considering the fundamental (pun intended) undermining of having Goodman's mid-film heroics and an act of God require to justification to the dark haired guy eats and dreams at Winkies in Mulholland Dr.;  here he is far more facile and smug than he was for David Lynch.

Neither as deep as required for an 'event' horror-thriller, or as simple as one might be tempted to pre-judge, Red State falls square in the middle.  Occasionally suspenseful and clever (a local deputy's planned trip to Italy has exceptional consequences to plotting), occasionally clunky in craft (excessive Snorricam shots or awkward background foley) yet, as is the directors wont, always giving the character actors ensemble plenty of gristle to tear away and chew on.  This is clearly the step outside the comfort zone that Cop Out should have been.  Those willing look past the films skewering of very easy targets and focus instead on the storytelling sturm und drang will get a zesty enough enterprise to convince this writer that Smith should put down his twitter account and self-depricating pothead routine and keep pushing forward in this whole movie-making career that he seems all too keen to abandon.  Far from a perfect entertainment, Red State nevertheless is a solid entry in the growing list of new century cultist films and, despite its occasional schizophrenias is an upswing moment for Kevin Smith.