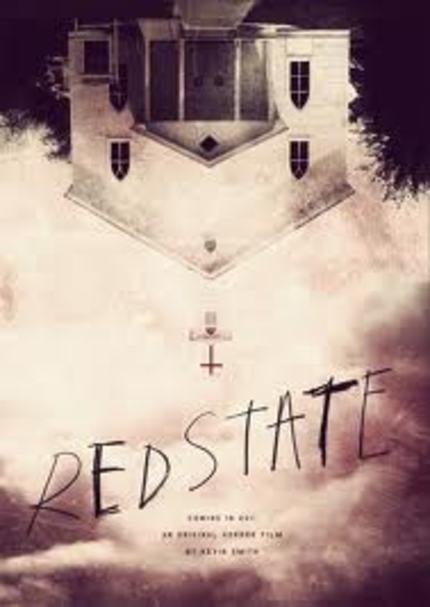 [With the 15th edition of Fantasia in Montreal kicking off today, we have Shelagh Rowan-Legg's review of Kevin Smith cult-focused horrorshow, which happens to be the opening film, and making its Canadian bow after its roadshow tour earlier this year, pulled from our archives]

I'll admit I have never been a fan of Kevin Smith. I wouldn't necessarily call him a bad filmmaker; more that the worlds he creates and the characters that inhabit them have never held any interest for me. So when the teaser trailers appeared for Red State, I was intrigued. It neither looked nor sounded like a typical Smith film. And it is not, which is entirely in its favour. Smith has proven he can create a dark, intense film that is riveting and raw, and unabashed in its examination of the serious threat of the religious right in America.

It has been called a horror film, which it is not. But it is truly horrifying, mostly because of its accuracy, showing how a just a handle of extremists can wreck havoc. Not that they are the only ones under criticism. Any individual or group (such as the government) that would blatantly disregard human life is a target. Yes, the religious group is clearly the villains, but so is a government that fails to properly support those who are persecuted by these groups.

The film is tightly wound from start to finish, never giving the audience a moment to breathe. Making use of the RED camera system was a good choice; it produces the kind of intimacy that is exactly what the audience of this film does not want, and yet must have. After a flurry of action, the film would seem to slow down while Pastor Cooper (a mesmerizing Michael Parks) preaches his word. But this moment is necessary to realize the unleashing of the later insanity. Anyone who has ever heard or read words spouted by one of these groups will be familiar with the rhetoric, but this kind of cinematic confrontation is chilling. Cinematographer David Klein's camera work, Smith's script and brilliant casting move seamlessly through from the quiet to the perverse.

The horrific ending can be seen coming long before, but this does nothing to take away from its power. The film moves between the ATF trying to assess the situation, lead by John Goodman as the only voice of reason, and the fanatics on the inside. The relationship between the pastor and his apparent daughter and most fervent follower Sarah (Melissa Leo) demonstrates the danger posed by any such relationship, whether from the right or the left political/religious side.

I'm sorry to hear that Smith will only be making one more film after this; considering his remarkable achievement, I would love to see other films by him of this caliber.