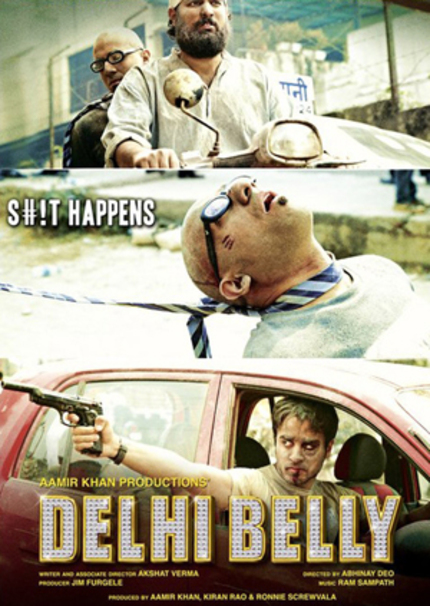 There is a battle for India's cinematic soul raging on screens both in the homeland and abroad.  As India's economy expands at a rate only eclipsed by China, so does the population increasingly seek to integrate itself with the wider world.  India is the world's largest democracy with over a billion residents, and they are now beginning to vote with their wallets at the box office, and the results aren't always clear.  This weekend two films opened that pit old Bollywood, represented by Amitabh Bachchan's Bbuddah Hoga Tera Baap, against the emerging international Indian cinema, in the form of Aamir Khan produced comedy, Delhi Belly. The young population inside India and much of the diaspora are demanding a more mature style of film, while many older non-resident Indians and people in rural areas continue to cheer on their heroes in over the top action and romance flicks. Over the last year films seem to be diverging further from the middle ground and settling on the edges of these two styles.

Delhi Belly is a caper film.  Tashi, played by Aamir Khan's nephew Imran Khan, is a journalist living a life of leisure with his two buddies in their sty of an apartment.  One of his friends, Nitin, is Tashi's photographer, the other, Arup, is a cartoonist who hates his corporate job.  They are fucking slobs.  One day Tashi is given a mysterious package to deliver to a mysterious address.  Through a series of comical mishaps, the original package gets mixed up with a stool sample, and I think you can guess where it goes from there.  The film is filled with action, colorful characters, gunfights, fistfights, a few songs, some romance, and a lot of foul language.  Oh, and it is very, VERY funny.

Delhi Belly is a film made for international audiences, made in India, with Indian stars and talent.  The film is mostly in English with a few digressions into Hindi, notably most of the Hindi spoken in the film is spoken by the villain.  The comedy is of the scatological type, literally. The action is presented in a fast and furious series of cuts and edits that could make a viewer dizzy. However, the most interesting and unusual thing about this film is simply the fact that it is so incredibly raunchy.  There are dozens of "fucks" in the script, a word you don't hear at ALL in mainstream Bollywood features, there are numerous "shits" which are less rare but still unusual, and a lot of other curses thrown in for good measure.  There are two overt references to cunnilingus in the film, including one brief section where Imran appears to be servicing his lady friend only to be interrupted by a phone call.  There is also a reference to fellatio that ends up in a full blown (pun intended) musical number.  The film also trades freely in diarrhea and fart jokes, as well as a visible erection (under pants),   All of these are normally taboo in mainstream Indian cinema, and frankly, Delhi Belly just doesn't give a fuck.

There are several schools of thought on the crass nature of the film and its script.  The first, and the one I subscribe to, is that it is simply time that these kind of films get made in India.  Last year I said the same thing about Q's Gandu, that it was a wake up call to Indian filmmakers, and I think that the reaction to this film will prove to the film fraternity in India that their audience is more mature than they think.  Another opinion that could be put forward is that the film is crass for crassness sake, and I can see that opinion gaining traction. However, the most dangerous position that people can, and will, take, is that the film is harmful.  India is a very conservative country, with a media practically held hostage by extremist religious groups and morality police. Most people outside of India don't think of Hindus as terribly militant, but inside of India they hold a lot of sway, and the hardcore guys are not going to like this film. I predict that criminal complaints will be filed against the producers before the weekend is over.

I think India is ready for this new cinema, but another question worth asking is whether the world is ready to see India like this. It isn't Shakespeare, but it is good fun. I can see Delhi Belly enjoying a healthy run in American arthouse theaters, should someone dare to pick it up. Many of the things that act as deterrents for American audiences; the over the top action and sentimentality, the numerous songs, and the egregious runtimes, are not an issue with Delhi Belly.  I saw the film with a packed house of NRIs in Dallas and the entire crowd was in stitches from start to finish, yet the humor is not really specifically Indian.  Is that a bad thing? I'm not sure, I don't think the film has lost it's soul, I think, perhaps, that it has simply found a way to appeal to a broader audience while leaving a few tidbits in for the locals.

Aamir Khan has been at the forefront of the attempt to take Indian cinema to a global market.  With his recent film, Dhobi Ghat, he traveled to film festivals around the world and showed what Indian parallel cinema (non-musicals) is all about, and his previous producing venture, Peepli Live, took on the issue of land requisition and poverty. Delhi Belly is another step in this process, perhaps Khan has finally figured out a way to truly break through, I certainly hope so. Back in the homeland, the battle for Indian hearts and mind rages on, do they move forward or stand still? I love both types of film, the over the top action and romance give me a huge kick, but this new type of film that is trying to break free is also very appealing. I can't say yet who has won this battle, but what I can say is, can't we all just get along?