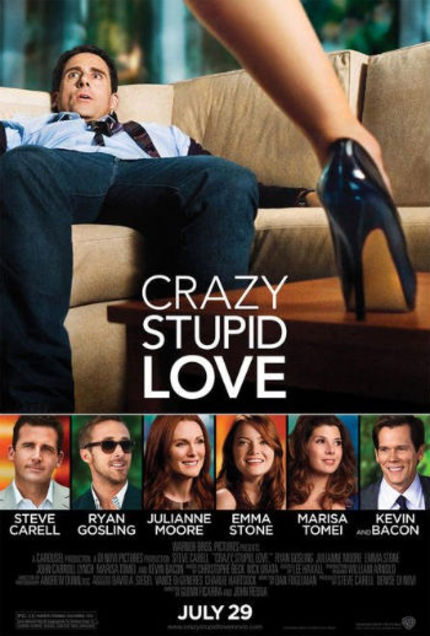 So baldly manipulative that it feels like someone is pinching your nose while pouring Rogaine down your throat, Crazy, Stupid, Love. proves to be as irritating and arbitrary as the punctuation in its title.

Granted, I don't laugh at the same things as other people, and the vast majority of the audience at the advance screening I attended were in hysterics at things that I found only faintly amusing. What grated on my nerves were the eye-rolling contrivances that pile up like the bodies in a Takeshi Kitano movie. It's as though writer Dan Fogelman and directors Glenn Ficarra and John Requa have no confidence in the ability of the average viewer to add 1 + 1. (The answer is 2; cue dramatic strings swelling as a rainstorm bursts forth to confirm your answer.)

Maybe even more of a surprise is that Ficarra and Requa agreed to direct the project at all. They've previously been responsible for writing Bad Santa and writing and directing I Love You Philip Morris, two films that reflect a sharp, subversive point of view. Crazy, Stupid, Love. is neither sharp nor subversive; instead, it's fuzzy-headed and conventional, something you'd expect from a writer whose credits include the animated Cars, Bolt, and Tangled. The characters are not smart, modern 'toons, but the variety that populated 60s US TV shows in sub-moronic abundance. The jokes are broad and/or corny; some of the wisecracks are funny, but there's no rhyme or reason for what lines work and which don't.

The cartoon analogy is the best way to explain Cal Weaver (Steve Carell), a middle-aged sad sack, and his unhappy wife Emily (Julianne Moore), who declares in a loud voice that she wants a divorce while they're having dinner in a quiet restaurant. (Many of the plot points are made in loud, declarative sentences, the more public, the better.) On the drive home, the clumsy exposition begins, as Emily tells Cal: "After almost 25 years of marriage ..." as though her husband is a stone-age throwback, a man who'd forget how long he was married. (We're surprised they're not named Fred and Wilma.) Cal not only doesn't want to talk about Emily's desire for a divorce, or deal with her hastily-blurted confession about an affair with a co-worker, he doesn't want to hear anything about it at all, so when Emily keeps talking, he unbuckles his seat belt, opens the door -- while the car is still moving at a moderate speed -- and plops out, rolling along the street.

Cal is fine, of course, and proceeds to move out of the family home with dispatch and without emotion. He's bottling up his feelings, of course, which he pours out loudly at a bar every night, which catches the attention of Jacob (Ryan Gosling), a smooth and handsome sexual operator who we've already seen trying to work his magic on Hannah (Emma Stone), who rejected him out of hand. Well-dressed and supremely confident, Jacob takes pity on Cal, imposes a quick makeover on him, and makes Cal tag along as he continues on a seemingly endless string of one-night stands.

Emily spends much of her screen time crying or on the verge of tears, even as she continues her affair with David Lindhagen (Kevin Bacon), who doesn't seem to have any personality beyond his puppy-dog eyes for Emily. Cal and Emily's son Robbie (Jonah Bobo), 13, nurses a crush on beguiling 17-year-old babysitter Jessica (Analeigh Tipton), who nurses a crush on 40-something Cal. Cal ends up as a ladies' man, embarking on a series of meaningless sex dates after scoring with the easily-bedded Kate (Marisa Tomei).

The shenanigans taste like a casserole made from stale leftovers.

The comedy is hit and miss, and then it dawns on Cal that Emily was his one true love, his soul mate, and he should have fought harder to keep the marriage alive. That's the message he's taught his son Robbie, which is why Robbie keeps hitting on Jessica and declaring his love for her in increasingly public and embarrassing displays. And it also becomes the driving force behind Jacob's decision to give up his tom-catting ways after he and Hannah spend a charming and chaste night together. It's true love, after all, and when your one true love comes calling, you don't want to blow it.

At least, that's the lesson the movie keeps hammering home, time and time again, repeating a mantra that echoes down through the decades of romantic comedies. Crazy, Stupid, Love., though, is more a drama than a comedy, one that takes the idea of a soul-binding romance seriously. If you share that belief, that you can love one and only one person in your entire life, maybe you too will roar with laughter and weep with sorrow and joy over the romantic travails that are photographed with loving care by veteran cinematographer Andrew Dunn.

For the rest of us, there is a delightful extended sequence with Jacob and Hannah, with the two actors complimenting one another in a very charming manner, Gosling's quiet intensity leavened by Stone's outgoing ebullience as they alternately flirt and get to know each other. Beyond that, there's not much to savor, except for the beautiful photography that shows off very well on a very large theater screen.

I was more fascinated by the grain than the film.